A new feature (ain't it shiny?) I'm starting today: Travel Thursday (and there was much fan fare).

I will detail a little piece of memory from my extensive life travels. It may be a foreign country or somewhere right here in the U.S. It could be a couple of years ago or when I was five. Travel ... man. That's what's it's all about.

This post is photo heavy. This serves as both a warning and enticement. I'll size down the photos but you can click on them for larger images. This won't always be the case. Sometimes, I'll have no personal photos to share. And before anyone jumps up and says: "Does this violate security policy?" or some such ... these photos are over two years old and they were taken for the paper and many have been published.

Backstory, I was deployed to Afghanistan from late 2002 to mid-2003. I primarily worked as the editor of the theater newspaper (newsletter, really), but went out to cover stories on occasion. One such occasion was a trip to Fire Base Asadabad. All of my print journalists were female, and this was an infantry outpost. They didn't want any females there. One, they didn't really have the infrastructure there to support any (no real separate tents or showers) and two because a female pilot had been up there a couple of weeks prior and had proven to them it was a bad thing.

So, off I was. No more direction than: find stories. I came out of there with some really good ones, a lot of stuff that couldn't be printed and a better feel for the country I was in. I took away three lasting impressions: 1. Northeast Afghanistan is beautiful. It's not the barren desert terrain that the rest of the country is. 2. We will never succeed in freeing the people of that country from oppression until we free them from a drug-based economy. 3. Until a younger population that escapes the dogma of patriarchy arrives, this country will never pull itself out of the dark ages. If the patriarchy was benevolent, it wouldn't be bad, but they use it to perpetuate the abuse of women. It's horrible.

So, on to the photo show: 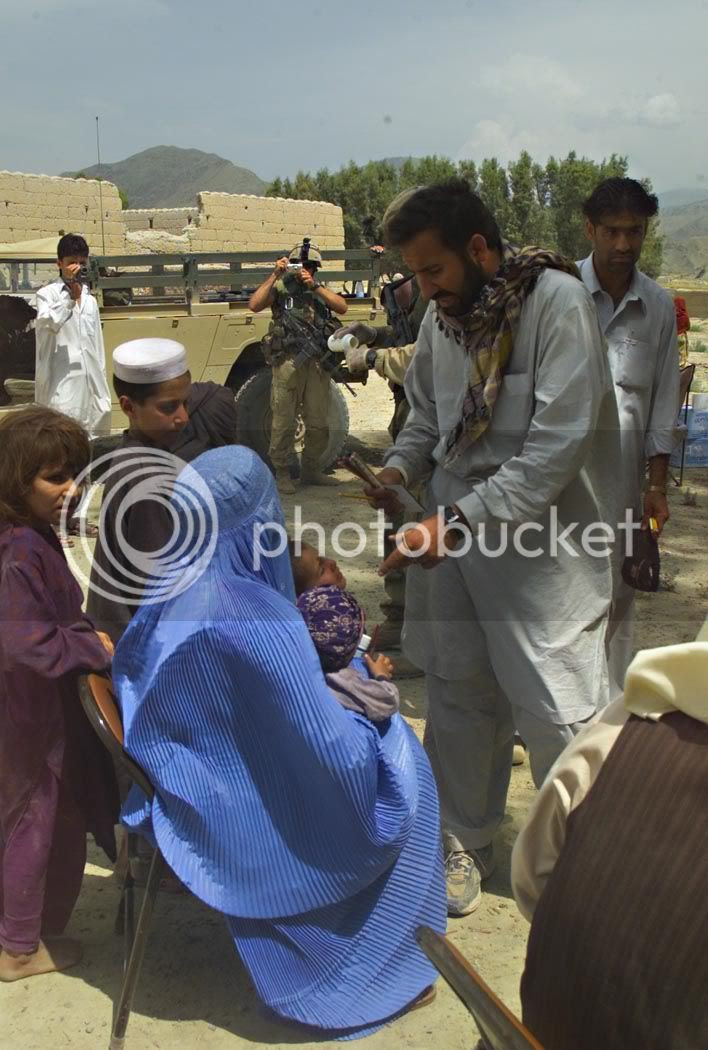 This is my obligatory burqa shot. One of the missions the U.S. military does, as part of a mission to reach out to local communities, is to send medical teams into surrounding villages. They can't do more than treat very topical kinds of things. Minor burns, cuts, ear aches, colds, etc. But it's a huge boon to our image there. It's hard emotionally, at times, as you will see in some of the upcoming shots. 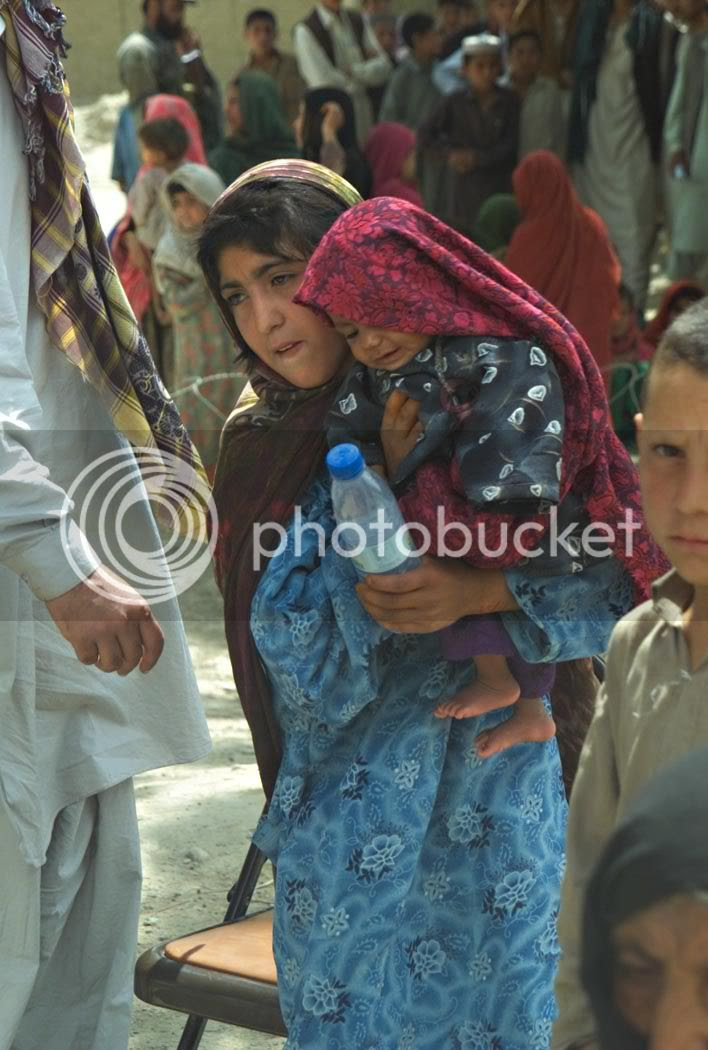 These folks would stand in horribly long lines. It was a very common site to see children taking care of children. I know that girls got married at very young ages (11 was the youngest I had heard of while there) and you sometimes wondered if some of these young girls were already mothers or were taking care of siblings. In this shot here on the right, I sincerely hope it's a sibling. But I don't know.

Another problem that the U.S. forces faced was the fact the men would demand that they must be the first to be treated. The sheer amount of people that came out meant that if the military allowed this, no female or children would be seen. So, the civil affairs folks would usually work out some kind of compromise where they could get some kind of mix. Or maybe two different lines. But in the few MEDEVALs (medical evaluation) I went to, the men were still given priority. What happened at this one is that a translator, with a civil affairs guy would walk into the crowd and find the women and children that seemed to be most in need of urgent care and would slip them in front of the men. It was interesting. 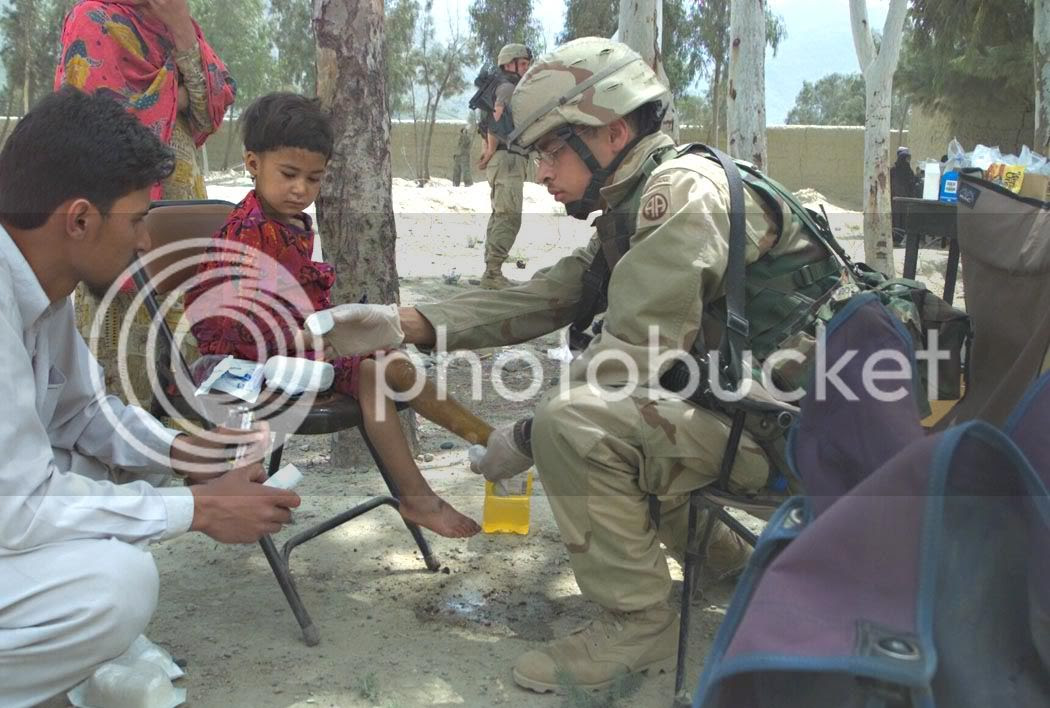 Earlier I said it was difficult emotionally at times to go to these things. Well, this little girl put a tear in my eye. You can't see well in the photo (even if you enlarge it), but she has pretty bad burns on her left leg. I didn't wan't to take any shots of "gore" so I didn't get any closeups of the wound. But it was a scalding burn. The interpreter in this shot, on the left, explained to me that scalding burns are very common to children. Most homes have a pot-belly style stove that serves to heat there home and to cook on. When a child learns to walk, they will be temted to pull pans off the stove. Somtimes these pans will have boiling liquids in them. He didn't know if that's what happened to this girl, but he said that he would not have been surprised if that happned. He also said that he would not have been surprised if her father had simply thrown boiling water on her as a form of punishment. The interpreters never let us know who the fathers of the children were. 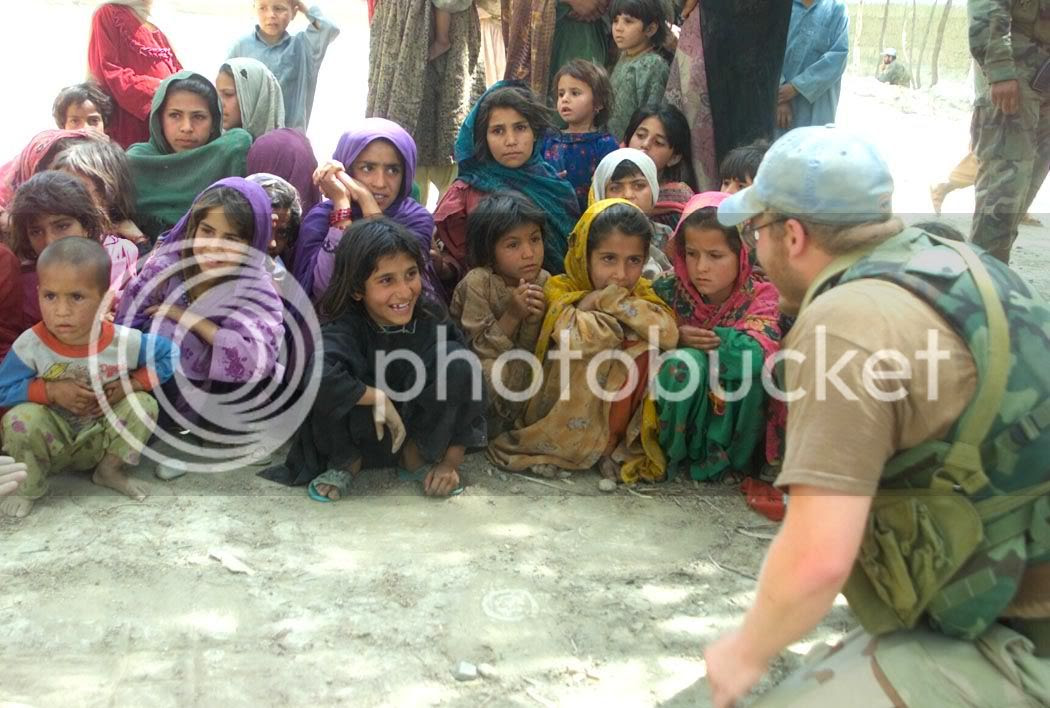 While the medics take care of the wounded, and the other soldiers provide security, civil affairs soldiers speak with villagers and try and make friends. Here, a civil affairs guy spent some time trying to teach some children how to play tic-tac-toe.

They wound up writing all kinds of things in the sand. I doubt these girls had this much fun in some time. I think that girl in the middle fell in love with Chet (the CA guy). 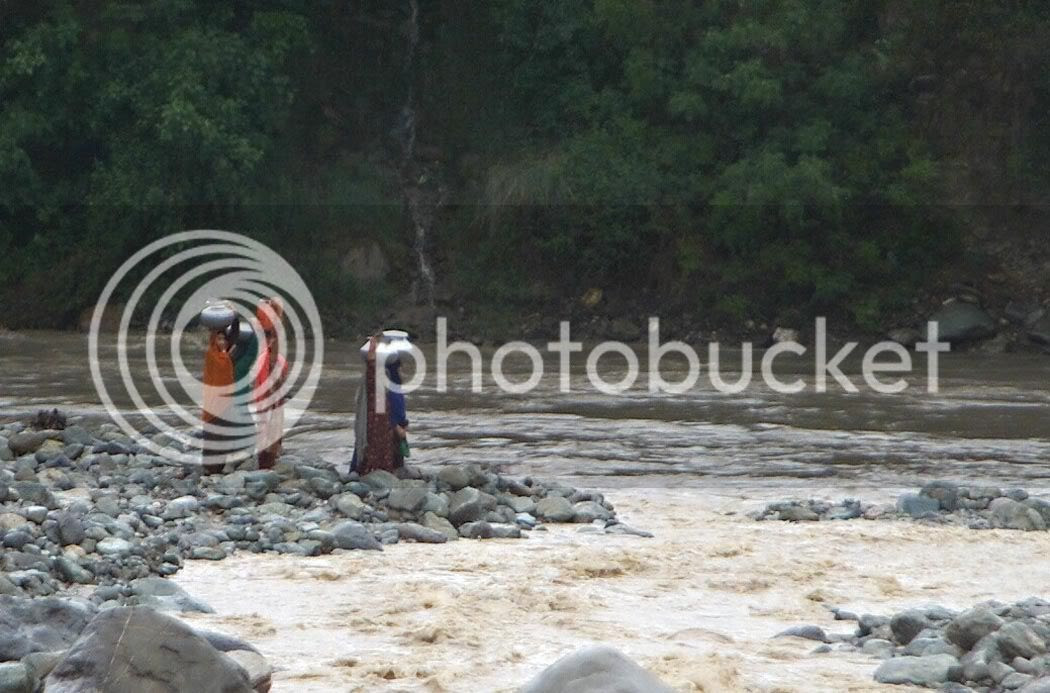 I guess these girls were going to collect water from the river. I hope it was for washing clothes or something and not for cooking or driking 'cause these river was filthy. I'd seen folks fishing, bathing, wading their animals in it ... I can only imagine what it's been used for. I know for a fact that many of the home surrounding the fire base had wells, so I'm eased by that knowledge. 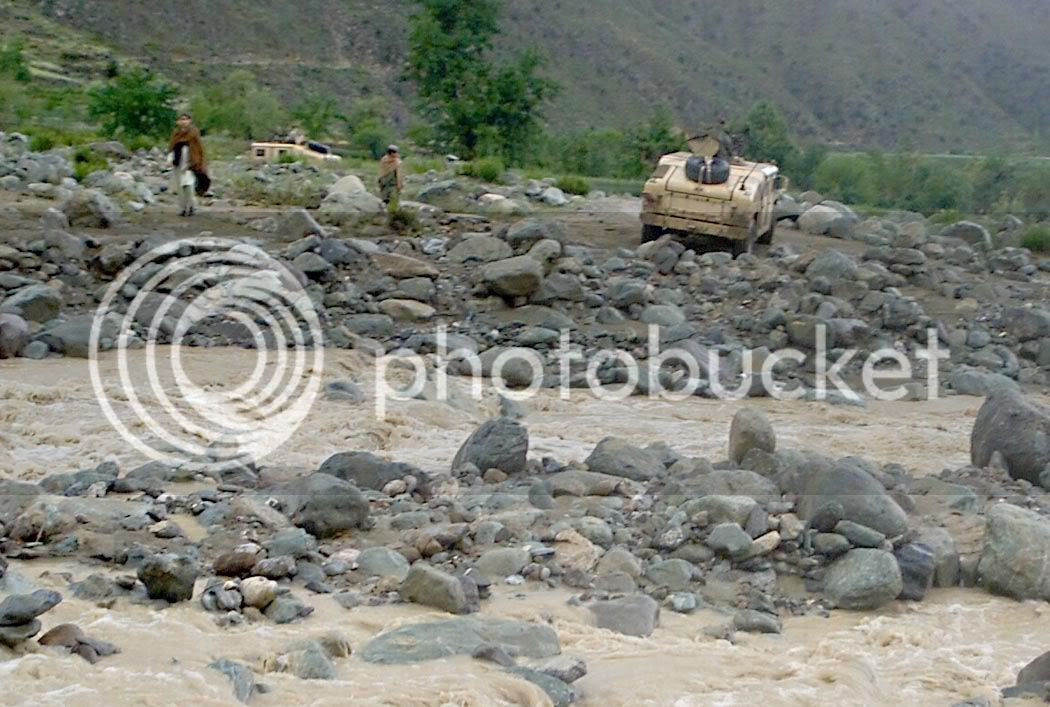 It was hard to pick out a decent shot of the girls. All these shots of the roadside and such were taken from the passenger side of an up-armor HMMWV (identical to the one in front of us here on the right). So, while crossing terrain such as this, it's sometimes difficult to get the shot.

For the sake of Uzz (and anyone else into photography), I was shooting with a Kodak Digital Backed Nikon F5. It had a Nikkor 70-300 zoom lens. While I wish we had Nikon D1s (took much better photos and just as rugged) or the Fuji S1 Pro (GREAT PHOTOs, but not very rugged) this camera was very rugged. It survived the environment very well. I'm sure folks will argue with me about how well a Kodak's RAW file can be manipulated, etc. Well, I don't use RAW, I use JPEGs and EPSs for newspaper production. Give me high-quality JPEGs and a whole lot of storage and we're good. I also didn't like the Kodak menu system. It was difficult to switch from shooting outside to shooting under florescent lighting quickly -- something you have to do often in the military in a field environment. Just my 2 cents. 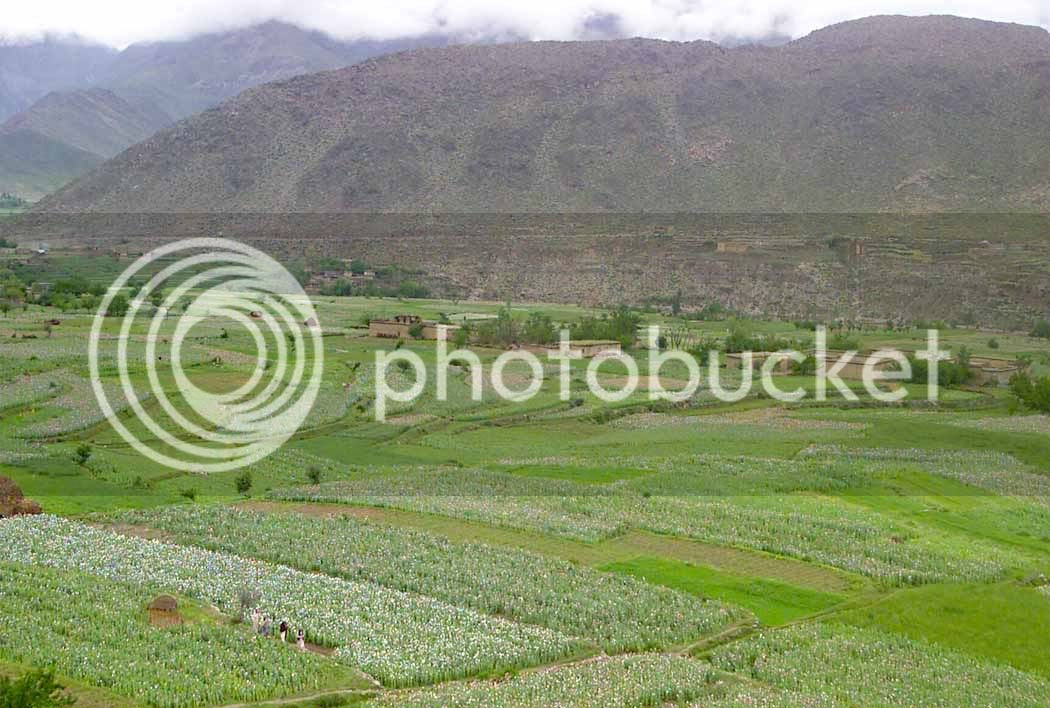 In the last two shots and this one, as I am shooting from the HMMWV, we are on our way to another CA event. We're going to sit in on a conference between two warlords and their people. We were also going to hand out aid packages -- coats and hygiene kits. In this photo you see the primary source of income for the country of Afghanistan -- the opium poppy. It's everywhere. I have so many pictures of poppy fields. It's one of, if not the major challenge to the U.S.: trying to convince the Afghan populace to get off of opium production and switch to consumer edible crops such as wheat, alfalfa, corn and others. They are making so much bank from opium they see no benefit to growing these kinds of crops.

I should also point out that most of these "farms" exist in a feudal state. A rich warlord owns all the land and leases out land to families to farm. They grow the opium and collect it for the warlord. The warlord makes much bank and lets the families live on his land and throws them a little money to live off of. Poor system. 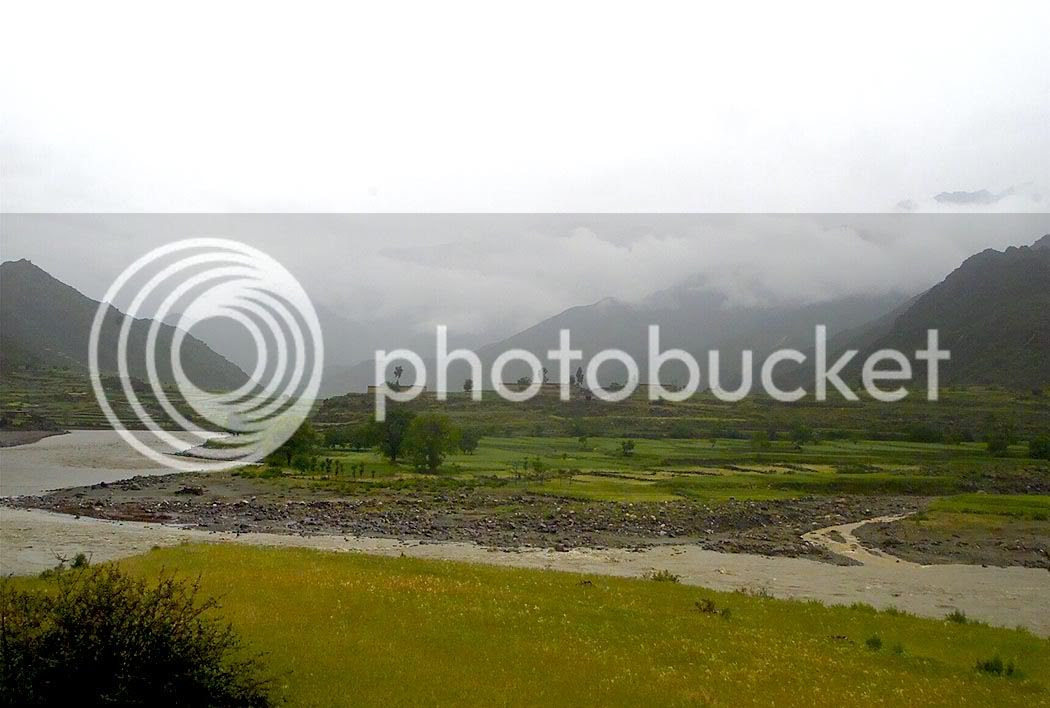 This is just a quick illustration of the native beauty of this country. You don't think of this when you hear about Afghanistan, but it's there. Gorgeous, lush greens surrounded by rushing rivers. 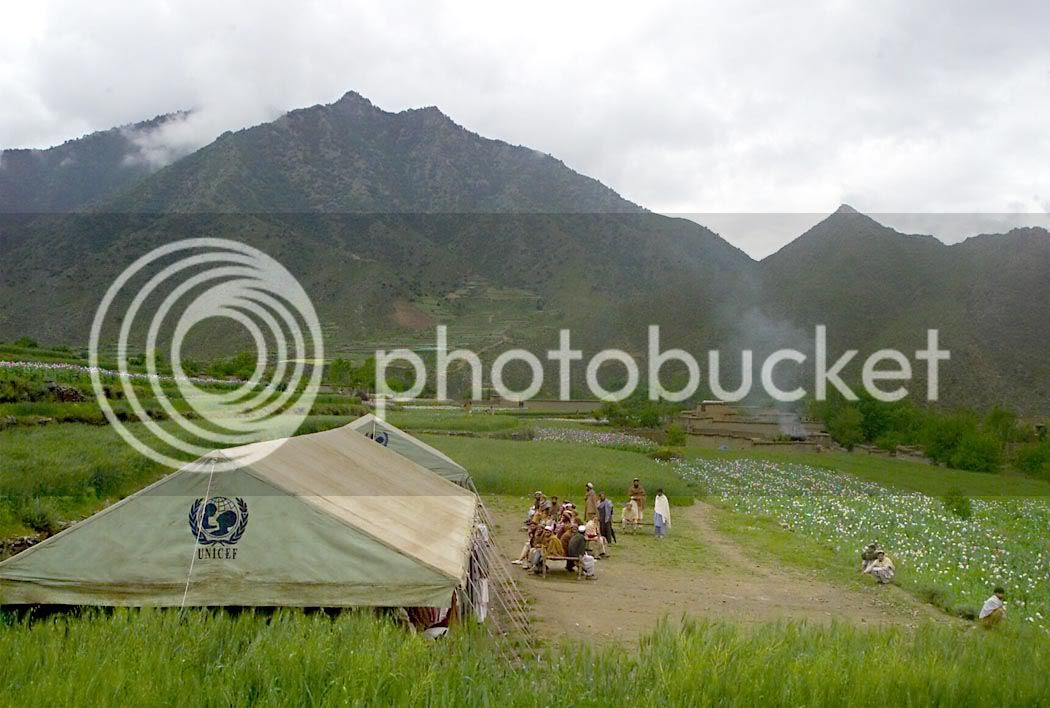 Here, on the left, we finally arrived at our destination. Notice the UNICEF symbol on the canopies. Also notice the opium fields just off on the right. I have always loved the juxtaposition in this photo.

As an aside, at this event we ran into a local kid who was an opium addict. This was pretty rare because their culture looks down on it so hard. Addicts are usually dealt with quite harshly. We were told by the people around him that they wouldn't hang around him and that he was a very bad person. 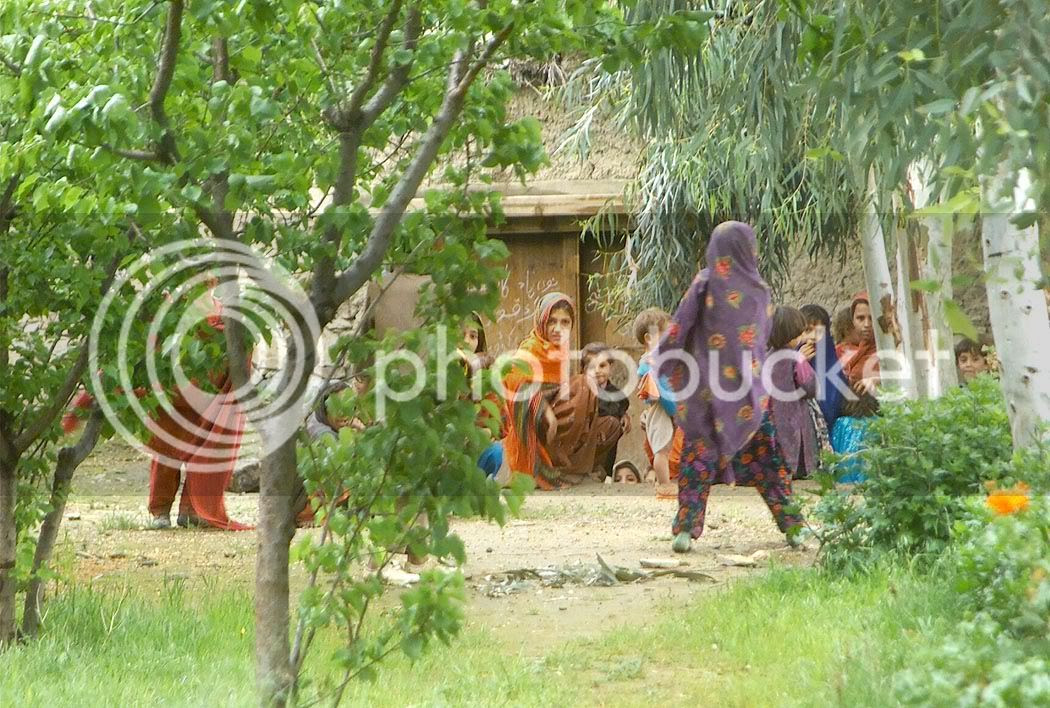 I just through this photo in to prove what a sneaky bastard journalist I am. It's very ... very hard to get shots of women and girls in Afghan villages that are not near the larger cities like Kabul or Jalalabad. To get the pic, you have to be clever or quick or they will look away fast and cover themselves up. Fortunately, one of the neat tricks on these Kodaks is a removable viewfinder. So you can literally remove the top portion of the camera and look down on top like a medium-format camera. It was this trick I used to get this shot and a couple of others. This is actually a small school and the girls are waiting for class. 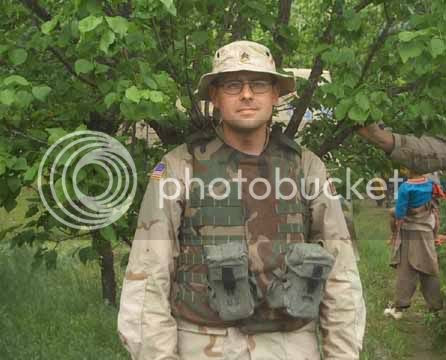 Lastly, a photo of me at the event. Those girls in the photo above are about 100 feet behind me in this photo.

We wound up leaving the event earlier than planned. The two warlords started to get a bit upset and talks started going downhill. The CA guys figured we'd better get out before they turned their hostilities toward foreigners. As had happened in the past.

Well, I hope you enjoyed today's inaugural Travel Thursday. I doubt I'll be doing any more war zone travel trips, but I felt the urge. Also, Mr. Bingley said something to me yesterday about an addict in the middle of an opium field so it sparked the idea. Thanks B.