Can you feel the awesome? 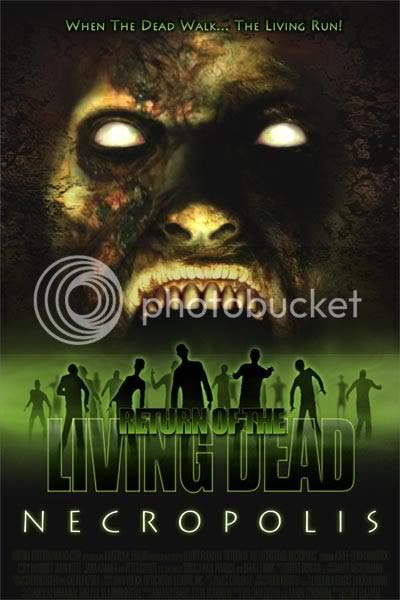 The wife and kids are in Canton, Ga., at my uncle's house. I was supposed to go too, but with the back being all gimped up, I didn't want to spend four hours cramped up driving.

The practical upshot is that I've had tons of time to watch movies. And, by God, I believe that I have just watched the most unintentionally funny film ever made - Return of the Living Dead: Necropolis.

I'm not even sure where to begin with this goody bag of ghoulish treats. I guess, first and foremost I must say that this movie goes beyond bad. I mean, it cycles around bad and becomes a parody of its own badness. To say that it's so bad it's good, like Plan 9 From Outer Space or This Island Earth, undermines its badness. You know how you can do something that hurts a little bit, like maybe poking yourself a little with a straight pin, and after a while it stops hurting and starts feeling good? Well, this movie is kind of like that. Except that instead of good, it's funny. So maybe it's more like stabbing someone else with a straight pin.

Some zombie movies have made attempts to make high-minded commentary on concepts like social classes and moral relativism, and ROTLD:N is no exception. They sought to explore an underground and some might say under-reported concept - dirt bike racing. Yes, ideologically breaking barriers no zombie has before and hopefully will never do again, this installment of the Return of the Living Dead series has introduced us to what is perhaps the gayest team of dirt-bike riding teens ever. Things kick off when they happen upon an illegal human harvesting operation by the local chapter of EVIL BIG CORPORATION, INC. when one of their friends is harvested. Oh, did I mention that they road dirt bikes when doing this. Oh, and did I mention that they ride the dirt bikes to a hip soundtrack featuring tracks by bands (that lost all their popularity in like 1998) like Powerman 5000 and SPF 1000. And what is with putting a thousand number after your band name? The next band I start is going to be called Thousand 9000 or something. We will rock the treads off the dirt biking world.

So, after discovering their friend has been abducted by EVIL BIG CORPORAION, INC. after some judicious hacking by I Get To Play Two Stereotypes: signature African-American and computer geek, the team gets their gear together and decides to release their friend.

I won't bore you with any more details, I'll leave that to the movie. It is suffice to say that zombies escape, security guards get eaten, chaos ensues.

To sum up: this guy wears that look for most of the movie trying to find his friend (when not dirt bike riding) and also because they did this to his mom. All the while being chased by these guys.

But what really sets this movie apart from other zombie movies ... what caused this movie to shoot right to the top of my all-time favorite really bad movies is this: When said friend is released and, of course, becomes a zombie. He has a kung fu fight with former best friend that ends with him being blown apart by a grenade. And really, don't we all need some more kung fu fighting zombies being blown apart by grenades in our life? I know I do.
Posted by Cullen at 7:19 PM