Things have been growing a bit stale 'round here. I've decided to make the move to Tumblr.

You can find me at Alt + Left Arrow. There's not much there yet, but I am very fond of how Tumblr works so there will be stuff.
Posted by Cullen at 9:34 PM 4 comments:

If you can't stand the heat...

I have been to some awfully hot places on this planet and this summer in Memphis is ranked right up with the hottest. Our heat index hit 130 the other day. That kind of heat is just hard to fathom. How do you even contemplate doing anything outside in that kind of heat? I remember training for football season this time of year when I was in junior high - I would call child protective services on someone who wanted to make kids train outside in this weather. We got ourselves a miserable heat wave and who knows when it's going to end?

However, about this time last year (middle of July, actually), our AC broke. And it was down for several days. We had to replace the entire unit, inside and out. It took time to get everthing installed and there were complications after that. Although them temps were 20 degrees cooler last summer, those few days made things plenty miserable.

So, even though my AC struggles to keep my house in the low 80s during the peak heat of the day, it's a blessing to have it. But my next house will have two units :)
Posted by Cullen at 6:37 AM No comments:

I used to be able to drive forever. Between J-Mom and me, we could have driven New York to LA in one continuous burst of tandem driving. But times have changed.

This past weekend we drove from Memphis to my parents’ home in north-central Louisiana then to Dallas and then back home to Memphis. It’s been a while since I’ve done that kind of driving and it was tough. Tougher than I thought it would be.

Daughter Number 1 and The Boy had been staying with my parents for the past couple of weeks. They had a great time, but were very ready to come home. After picking up the kids, we jutted out a bit further west to Dallas to visit some friends who moved from Memphis a little while ago.

Our visit there was nice. It had been a very long time since I’d last been in Dallas – though technically we were in a suburb – I was pretty impressed at their traffic management. Sure, there’s still gridlock, but for a city its size, Dallas does pretty well. DN1 said that the area we were driving into reminder her of Phoenix, but with trees. I think it was a pretty apt description.

We debated a bit over what to do with our time Sunday. There was some discussion about going to Six Flags, but rational thought won out. It was too hot, it would have been too crowded and a couple of the crew were not feeling 100 percent well. Instead we went here. Fantastic way to spend some time on a hot day.

Otherwise, a lot of time was spent watching shark-related programming and resting. J-Mom and her gal-pal got to spend a lot of time catching up and that made the trip all the more worthwhile.

Up to this point, we all doing pretty well (other than a few sniffles and a couple of oncoming colds), but the drive home was brutal. Next time, and there will be a next time, we’ll have to have some time between driving in and driving out.
Posted by Cullen at 10:26 AM 1 comment:

I saw this at Linkiest:

Can you spot the fake smiles?

Someone’s gotta do it

Sorry for the break in service, but I just haven’t had much to talk about. Everything’s either been kind of the same old-same old or just too depressing.

On the same old front, things have been quiet around here. My parents took Daughter Number 1 and the boy with them back to Louisiana for a couple of weeks. We go to pick them up this coming weekend. It’s amazing how quiet the house gets when you only have one of three roaming around.

This Saturday I volunteered at a certified barbecue judging class. I’ve been judging for the Kansas City Barbeque Society since earlier this year and it’s a lot of fun to be involved in this kind of stuff. It was a full class. There were 36 wannabe CBJs and the event organizer had to turn away about 12 more because we simply didn’t have and more room. These classes are great because you not only learn about the KCBS standards for barbecue, you get to go through what is essentially a mini-judging. The organizers provide samples of the four meat categories – chicken, ribs, pulled pork, brisket – and they’re presented to the students like they would be at a real contest. It’s a bit more laid back, but very similar.

There is a contest coming up here in September that is part of the local International Goat Days Festival. I really wish I was clever enough to do something with all that information, but there it is. The local township has a goat fest, we’ve got a sanctioned barbecue contest as part of it and I can’t even find something funny to say about that. Goes to show my state of mind, I guess.
Posted by Cullen at 8:06 AM No comments:

Bo is a source of constant joy. He has a wonderful sense of humor and is always interested in making people laugh.

Below the fold here are a few things I've posted here about or inspired by my son. Happy birthday, boy.

I had a nice, long post worked up where I was talking about hobbies and the energies we pour into them and I just had to select all-delete. Too whiny. Too scattered. Too …

In lieu of any enlightening content, here’s a thing:

I Write Like by Mémoires, Mac journal software. Analyze your writing!

You too can try it!

Of course, I ran through the thing a bunch of times with a bunch of different posts. Dan Brown popped up a few times (and I almost jumped out a window) , Stephen King a few times, Chuck Palahniuk several times, H.P. Lovecraft a couple and William Shakespeare once (right). So, I’m a very uneven writer. Tell me something new.

It really wasn’t that bad 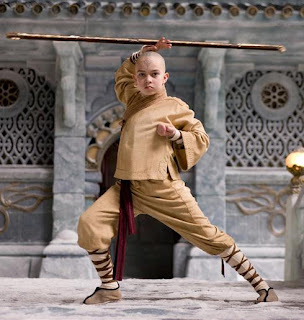 I took Daughter Number 1 and a couple of her gal pals to see The Last Airbender last night. Avatar: The Last Airbender is her absolute favorite program on TV. I didn’t know that much about it, but was pretty interested based on the previews I’d seen at movies and on TV, but then it started getting crucified by reviewers. It has an 8% fresh rating on Rottentomatoes; for some perspective, Twilight: Eclipse has a 53% rating, Signs (Perhaps Shyamalan’s dumbest film ever) has a 74% rating. Obviously some people just don’t know what the hell they’re talking about.

Anyway, the plot’s not all that important. It is suffice to say that a young boy has a great destiny and a great power and is going on a great journey. Beyond that, there are lots of big fight scenes, action sequences and special effects. It this a good movie? Well, not really, but it’s not bad either. It’s a popcorn flick and as such it really gets a bit more leeway in my estimation. Also, it’s a popcorn flick geared toward younger audiences based on a kid’s cartoon. I just really don’t understand why so many reviewers feel the need to pile on all this hate. Let’s take another perspective shot – Alvin and the Chipmunks: The Squeakquel has a 20% fresh rating. Come on! Again, The Last Airbender is no high-minded fare, but it’s better than animated chipmunks.

My final analysis is to wait for video. It’s really not worth seeing in the theater. Oh, by the way, we saw it in 2D – after Alice in Wonderland I refuse to see any live-action film in 3D until convinced it really does something for the film – and it came off just fine.
Posted by Cullen at 7:24 AM 4 comments: