So, how does Daughter Number 2 check if something is animal droppings?

Why, she stomps on it, of course.

Spent a wonderful couple of hours out at Shelby Forest yesterday. The kids got to play with their skateboards (Santa presents) and with some friends. We went on a short walk and then took off to get lunch.

All in all, it was a good Christmas. Had family with us, the kids were able to spend some time with their cousins and it was nice to be home for a change. Though, tomorrow we head out for a week off to travel to our extended families' abodes.

I'm looking forward to the trip. I want to see my parents and in-laws, but, mainly, I don't want to be here at work.
Posted by Cullen at 8:00 AM No comments:

So, this is where 50 of my bucks went last night. It's a mid-'60s era Teisco Del Rey EP-7 hollow body thinline. A cheap Japanese guitar aimed at the beginning guitarist who couldn't afford a Fender, Gibson or Gretsch.

So, that headstock is pretty cool and I love the big retro logo (a metal plate, not a sticker!). But it is missing the key off one of the tuners. 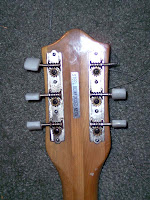 But I'm not too concerned about that. I can get these plank tuners for under $10 at Stew-Mac. 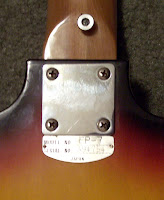 Also cool, the backplate with the model number and serial number.

The doggone strings sit a quarter-inch off the fretboard at the 12th fret. It has a wooden, archtop-style bridge but the neck isn't angled like it should be.

My question, do you think it's worth it to try and make it more playable? The tuning keys would be an easy fix, but I'm not sure what to do about the string height. I might be able to put a shim in the neck joint (it's a bolt on) and that might work. So, would you do it? Or should it become a piece of wall art?
Posted by Cullen at 9:02 PM No comments:

The definition of youthful enthusiasm 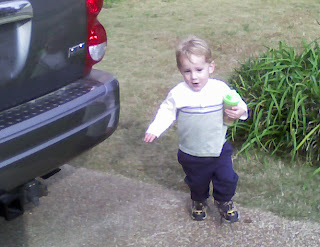 Help a brother out

My blog-bud and former neighbor, Wunderkraut, needs some help. He's been going through the process of adopting a baby girl from China for the past couple of years. The time's finally come for the process to come to an end and he needs our help to raise the money for plane travel.

Please visit him here.
Posted by Cullen at 7:45 PM No comments:

Everybody's got nice spam but me

In my current position, I deal with a lot of retirees. I get a lot of phone calls, letters and e-mail from them. Normally, it has to do with a change of address or the passing of a military retiree. Sometimes the notes are pretty straightforward. Quite often they take a pretty circuitous route to get to their point.

For example, I had the following in my inbox this morning:

Subject: My Dear Beloved One In Chirst

You might think this would be a dead giveaway, but I can’t tell you how many LEGITIMATE e-mails I get with subject lines like this. Maybe the misspelled “Chirst” should have been a tip, but people make mistakes, you know.

My Dear Beloved One In Chirst,

Please read this slowly and carefully, as it may be one of the most importantemails you ever get. I am Mrs. Mary Jack from Greece. I was married to Late Mike Jack. The Director of Veekrol Link Nig.Ltd, a seasoned

contractor in West African Region. He died on Monday,31 July, 2003 in Paris.

OK, I admit, I should have caught the “as it may be one of the most importantemails,” but, honestly, I skim e-mail and only read it in detail if I need to. So, I made it through this and got to:

We were married for seven years without a child. After his death I decided not to re-marry or get a child outside my matrimonial home. When my late husband was alive, he deposited the sum of $5.2 Million USD in a

And I hit delete.

Come on spammers. I have to deal with enough e-mail that’s written like this just to tell me they want to change their address. Why can’t you make it a little bit more obvious that you’re spam.
Posted by Cullen at 6:18 AM No comments:

Sunday night I broke my glasses. Not in an easily fixalbe way. Not in a way that I can just tape them up for the time being. Complete frame failure.

I couldn't find my old pair right away, so I did my best with some tape and tried to keep the lens from popping out every 30 seconds. Monday morning I went to the optometrist and ordered a new pair. Five working days is what I was told. What the heck am I supposed to do for five days?

The doctor asked me about contacts. I've been wearing glasses since I was in sixth grade, but have never tried contacts. I have an aversion to poking myself in the eye. But not knowing if I'd find my old pair, I decided to give it a shot. The doctor comped me a two-week pair to see how I like them. I'm undecided.

It's weird. Maybe there's an adjustment period, like with a pair of new glasses, but with the contacts things seem a little askew. Not really off, but slightly different. It's been messing with my head a bit.

I did find the old pair and the prescription in them is so old that the distance vision, anything past 20 feet or so is kind of blurry. So, they also mess with my head. I'm only supposed to wear the contacts for 6 or 7 hours at a time to help my eyes adjust. Then the glasses. I'm on day three and my head is killing me. There doesn't seem to be enough Motrin.

Anyone been through this? Anyone care to let me know if your eyes start adjusting to the contacts better?
Posted by Cullen at 6:52 AM No comments:

Wunderkraut, in the comments in the post below, asks: Why would you want to go to grad school?

Between my GI Bill and student aid, I will earn more a month than just about any part time job I can get right now. So that's the short of it.

The long of it, well ... it will be beneficial. Career-wise it's not something I need too much. If we decide to move from here at some point, it would help, but we're really thinking of settling here. My current position would be the biggest boon to any promotion opportunities here.

So, other than short-term money why am I doing it? When I finish my degree I'm going to seek part time employment teaching communications at one of the many colleges in the area.