Dear SyFy, Discovery, and any other channel out there

For the love of God, please stop it with these freaking stupid, vapid, inane "ghost hunting" shows. I mean, the whole John Edwards, trivial psychic, was bad enough, but these programs are a new low. When I'm couch surfing, I used to be able to rely on SyFy to have some cheesy B-movie or old TV show on, but now I have to contend with some supernatural show that seems to be on every other hour. I may have to see if I can get a cease and desist court order based on the damage suffered by my brain cells every time I have to sit through a commercial for one of these shows.
Posted by Cullen at 7:09 AM No comments:

For most of my adult life I have held the belief that I will not retire, in the traditional sense of the term. Rather, I'll have to hold steady employment for the rest of my life. Twenty years ago this would probably have sounded a lot sadder than it does today and I'm pretty comfortable with this notion. I'm not sure when it happened exaclty, but the idea that one works until their sixties and then stops seems more fantasy today than anything else.

Working for the government, I figured I would just keep my job until I either passed away or could no longer physically do anything. However, after my recent Disney World jaunt, I am rethinking things. Rather than sit out this job, I'm wondering now if I might actually take a "retirement" at 30 years and then find a retirement job. Many active-duty military retire after 20 - 30 years and go into another career to make ends meet. While I will still have to make ends meet, my goal isn't necessarily to have another career. I just want to get a job at the happiest place on Earth. I think finishing out my years working at Disney World would be a great thing.

Something I noticed walking through the different parks is that many of the park employees are older, retirement-aged folks. The guys checking the bags at the front of every park, a lot of the people staffing the photo booths at the end of many rides, many of the street vendors were all elderly. Of course this set my mind to working. Because I've held the belief that I'd have to keep working until I could no longer do so, I've never developed any kind of retirement plan. Now I'm starting to plot.
Posted by Cullen at 8:19 AM No comments:

We got in yesterday afternoon and today's my first day back at work. An earlier morning does not exist than the first one after a vacation.

My inbox runneth over. My tasker list is full. The a/c is apparently not working right. Yet I'm happy to be here. Back to the grindstone and all that, but I almost forgot how much I enjoy doing all this stuff. I've got tons of it ready for me; I'll be posting some more vacay photos in the near future.
Posted by Cullen at 6:28 AM No comments:

Some kind of trip report 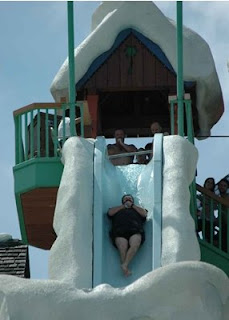 Not quite home yet, but we made it safe to Biloxi on the first leg of our drive back home. J-Mom's dad and brother accompanied us to Disney World and were a huge help. Disney is running a deal now where military folks and retired military can get into the park for free for five days and get up to five more people in for five days for $99 a person. Since J-Mom's dad is retired Air Farce we were able to make use of this fantastic deal.

We all enjoyed the Toy Story Shootout in Hollywood Studios and my brother-in-law and I got a lot of use out of the Tower of Terror and Rock-n-Roller Coaster. I think the best coaster out of all parks is the Everest ride, but they all pale after you go down the Summit Plummet in Blizzard Beach. The Plummet is a near-vertical drop from 120 feet. I hit 65 MPH my first time. It was the best kind of scary.

So, we had lots of fun, lots of scary, lots of smiles, some tears (Daughter Number One DID NOT like Tower of Terror), and we're already talking about when we're going to do it again. It'll be a few more years, but it will happen.

Tomorrow we head back to Memphis. While it's been an exciting couple of weeks, we're all ready to go home.
Posted by Cullen at 9:26 PM No comments:

Early tomorrow morning, I'm heading out to San Diego to hold a focus group. My family has been in Arizona for the past two-and-a-half weeks and they're driving down to meet me tomorrow. I can hardly wait. From San Diego we're driving(!) to Orlando. We'd made Disney World plans some time ago and this trip to Arizona was unexpected. It's been a while since we've driven this kind of distance, but we've given ourselves plenty of time.

Anyway, reuniting with the family and going to Disney will make for a wonderful experience. Hope you all have a good couple of weeks. Know I am.
Posted by Cullen at 4:44 PM No comments:

Can't believe I'm only finding out about this now

The following is reposted from The Fifth Fret:

CHICAGO, IL (September 1, 2009) – Six-String Bliss, the premier guitar-talk podcast since 2004, has teamed with Peterson Strobe Tuners to raise funds for Guitars For Vets, a non-profit organization that provides musical instruments and education for Veterans.

Six-String Bliss reviewed the Peterson StroboStomp 2 on Episode 164 of their podcast released on August 31st. Thanks to the generosity of Peterson Electro-Musical Products, this piece of gear will be the first step in a fund-raising effort for Guitars For Vets.

“We wanted to do something that would benefit this great cause,” says Six-String Bliss host Andy ‘Pipes’ Piper. “Times are tight, and giving is down for all non-profits. We wanted to give our listeners a way to donate and get some great gear.”

Here’s how the Reviews for Vets program will work: Six-String Bliss reviews a piece of guitar-related equipment from a participating manufacturer. The gear is then placed on eBay through ‘Giving Works’, an online non-profit fundraising tool. The entire selling price of the gear will then be donated to Guitars For Vets.

Six-String Bliss co-host PT Hylton hopes this will be the first of many ‘Reviews for Vets’. “It’s really a win-win situation,” says Hylton. “Our listeners get the chance to bid on a great piece of gear, and a deserving organization gets to receive the raised funds.”

The Peterson StroboStomp 2 auction will start on September 6th and run through September 13th.

To get involved with the Reviews for Vets program, please contact Andy ‘Pipes’ Piper at pipes@sixstringbliss.com

About Guitars For Vets:Guitars For Vets is a registered 501(c)3 non-profit organization based in Milwaukee, WI, that provides ailing and injured veterens with guitars and instruction. The hope of Guitars For Vets is that self expression through the gift of music will restore the feelings of joy and purpose that can be lost after suffering trauma.

About Peterson:Peterson Electro-Musical Products, Inc. is a Chicago-based, family-owned company that has been manufacturing electronic tuners since 1948. Most commonly recognized for their mechanical strobe tuning products, Peterson also offers a digital line of instrument tuners. The Virtual Strobe™ series was introduced in 2001, followed by the first ever True-Bypass tuner of any kind, the Peterson StroboStomp™ in 2004. StroboSoft™, Peterson's strobe tuning software for PC/Mac, was released in 2005 followed up the major release of StroboSoft 2.0 in 2008. iStroboSoft™ for the iPhone™ and iPod touch® was introduced in 2009.

About Six-String Bliss: Six-String Bliss is the internet’s longest running guitar talk podcast. Since 2004, the Bliss has brought together a worldwide community of passionate guitarists in a weekly discussion designed to share our passion for guitars and delivered directly to our listeners’ computers. Visit them at www.sixstringbliss.com.
Posted by Cullen at 10:08 AM No comments:

Laughin' and Cryin' with the Reverend Horton Heat - FTW! 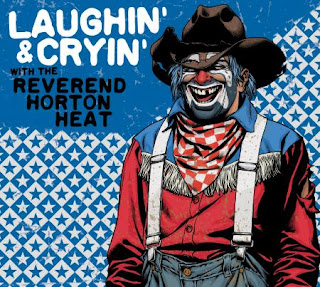 I have been a fan of the Rev for a long time. They're easily in my top five favorite bands. I'd probably say they're close to first or second place. I just love this band. It's been a while since RHH put out a new album of original material. They did a Christmas album in 2005, and Revival was released in 2004. A pretty long time to go without new stuff from a band that has been cutting new albums about every two years since 1991.

Laughin' and Cryin' is quite worth the wait. With a more country feel than most previous entries, it's a more mature entry. Not that Jim "The Reverend" Heath has lost any of his satirical bite or rockin' attitude, but he seems to have come to understand that you can nuance those things as well (or better) than beating them into your head at 4-4 time.

Heath is no slouch on the guitar. On previous albums he tears up his fretboard with precision licks of which the best shredder would be proud. Tempos slow and solos get more care on Laughin' and it helps set the mood. In fact you have to wait until the last song to get anything much up-tempo but even that entry "Oh By Jingo!" has more of a Chet Atkins feel to it than anything really rocking. And that's not a bad thing.

UPDATE: After 10 or more complete listens, I have concluded that this is the perfect fusion of Chet Atkins, Duane Eddy and Link Wray. It's the mellowest RHH album ever. I'm digging it.

Here's a great piece on the Rev from a blogger I just discovered.
Here's a piece I wrote about the Rev a while back.
Posted by Cullen at 6:56 AM No comments: