Holy crap this is funny

Yeah, so I understand that the LOLCat phenomenon hit critical mass a while ago, but, by God, this is one of the funniest things I have ever seen.

Posted by Cullen at 8:27 PM No comments:

Memphis Mayor Willie Herenton has announced that he will resign July 10. This is the second time in as many years that the mayor has promised to resign, so I'm not holding my breath, but it does look as thought he'll actually go through with is this time around.

From the Memphis Commercial Appeal:

This time, from all indications, Herenton is serious and will leave his City Hall office July 10 -- nearly 18 years after he became the city's first elected black mayor -- to devote his energy to a run for Congress.

The bad news is that he's running for Congress, and he could very well win considering that the 9th district is pretty much entirely Memphis.

Well, I'm not happy about what this might mean for the state, but I am ecstatic about what this could mean for the city. Someone with better sensibilities about crime and plans to bring business back into Memphis wouldn't be a bad thing. We'll wait and see.
Posted by Cullen at 8:29 AM No comments:

An observation on a hot Wednesday morning

The freedom to swing my fist through the air ends where your nose begins. This saying holds true in most cases. Significant exceptions to this philosophy include: Select contracting personnel. Those fuckers need to be Hector-stomped.
Posted by Cullen at 9:34 AM No comments:

I was gone, now I'm back

I was in Schaumburg, a suburb of Chicago, for a week-long conference. Didn't stay extremely engaged at the conference, mainly worked our table. I had four focus groups scheduled, but people only showed up to one. I did get good feedback, but I think I'm going to have to schedule a special trip and set up focus groups outside of a conference to get any kind of decent attendance.

Have a great Father's Day all the daddies out there.
Posted by Cullen at 8:26 AM No comments:

The thought of this kind of makes me happy 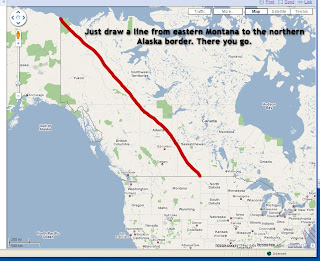 At work, we're having some minor problems with one of our contractors that is a Canada-based company. One coworker, overly fed up with the situation, suggests we just invade Canada so we can make them do things the right way. I feel that we really don't need all of Canada, just the bit that connects us to Alaska. The map here represents my thoughts on what we should annex - everything from the north-east Montana border to the north-east Alaskan border.

There is some discussion about what we'd call this new state. I suggest North Montana though Cullenland is OK too.
Posted by Cullen at 8:49 AM No comments:

Does everyone remember Sorryeverybody.com? It appears that they've now gone from a "Sorry that the U.S. voted for Teh BUSH!" and is now a "Hey world, let's party 'cause Obama is TEH SAVEUR!"

So, wouldn't it be interesting if someone, oh say, Pajamas Media or Maybe Right Wing News stood up a conservative version apologizing to the world for the upcoming shitstorm? Maybe a "Guess what folks, you're screwed" site. 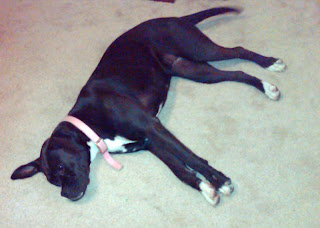 We're dog owners again. We were sitting and it has morphed into ownership. But that's a good thing. Our previous attempt at dog ownership didn't work out quite so well, but Ally (Aly? Allie?, we haven't decided on spelling yet) has fit into our family so very well. A boxer and lab (we think) mix, she is a well-behaved, good natured dog. She has her quirks. She likes to jump a little and she will bolt out the front door if given the opportunity, but on the former she's only showing her love and the latter she's just checking out the neighborhood.

And the tail? It thumps with Thor-like might.
Posted by Cullen at 7:14 AM No comments:

It's the little things 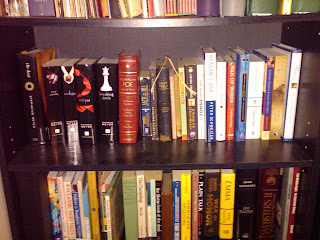 It's the little things sometimes. Our books aren't organized; they'd barely be on shelves were if left up to me. I just love how the eclectic nature of our lives can be captured on a shelf. The Twilight series next to Poe next to the Bible next to the Zombie Survival Guide next to Reagan. That's life, brutha.
Posted by Cullen at 5:13 PM No comments:

Why is it so hard to do something the right way?

One thing I never seem to learn, or keep re-learning if you’d rather, is that in government work, if you want something done expeditiously, you’d better walk that crap through yourself. Paperwork is lost, people move or retire, policies change, required forms get added, but what is most often the case is that the person who you most need to pay attention to your project does not share your sense of urgency. And I don’t mean that you’re after some unreasonable time table. I don’t mean that you dump some project on someone’s desk and ask for it later in the day. No. I mean that you expect someone to do their job in a reasonable and timely manner. That, is the problem I seem to keep running into during my 15 years of working for the government.

While most of us have an understanding of things that can sit for a bit and things that need handling quickly, there are always those that just put things off for far too long. That’s where I’m at right now. I’m still waiting to finish a pet project I’ve been nursing the better part of a year-and-a-half. One dude. Just one dude is really holding this up. I mean, I didn’t think it’d be faster to learn how to do his job so I could get this done, but now I’m wondering.

I’ve finally got my project to the point where it’s kind of out of this other guy’s hands, but he’s going to be involved in finishing it up and I guess I’m just going to have to be on his ass every day. I hate having to be that person, but I’m sick and tired of this project just sitting around.

I understand that it’s government work, but dude, it is still work.
Posted by Cullen at 7:23 AM No comments:

With some help, some advice and some elbow grease, I think I finally have the bathroom leak fixed.

A friend came over yesterday to look at our leak and came to the conclusion that the toilet probably had a hairline crack somewhere we couldn't see (or just naked to the eye). So, I ran out to Lowe's and picked up a new one. It's surprisingly easy to remove and install a toilet. The worst part was tightening the tank to the bowl. Getting a wrench back to tighten the bolts is next to impossible, but I finally worked it out.

Now we just have to fix all of the water damage and the damage we did to the surrounding dry wall trying to discover the problem. Yay.
Posted by Cullen at 7:41 AM No comments:

Up kind of leaves you down 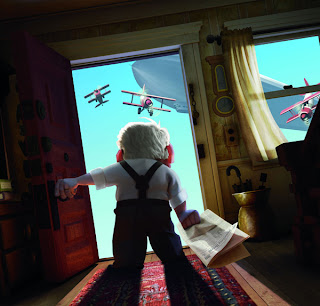 I’m conflicted about my feelings for Up. We went and saw it Friday, but I wanted to take the weekend to ruminate on it. On the one hand, it was a somber tale of an old man fulfilling a lifelong dream. On the other, it was a lighthearted romp. Leaving the theater, my entire family was lukewarm about the flick, but we’ve all been quoting it extensively afterwards.

I guess the problem here is that Up really is two stories. The set-up for the main story is lengthy and sets a tone that is betrayed by the latter parts of the film. What we’re presented with in the beginning is the tale of two kids who grow up together dying to become explorers. It doesn’t happen and there is plenty of heartache along the way. AND THEN, the old man does leave and the adventure happens. The issue I had is that the intro is so long, you’re kind of in a somber mood by the time the humor starts to kick in. But the humor does kick in.

Once the house leaves the ground, the movie picks up, but you’re already a third into the flick. If you’ve made it this far, though, you will be rewarded. While most of the major plot points are quite transparent – it is a kid’s flick after all – that doesn’t rob the movie of its humor or poignancy. Of course, the best part of the movie is the dogs. The advertisements kind of oversell how often the dogs are in the movie, but they do play an integral role.

Lastly, we went to see it in 3-D and while I’ve been very pleased with 3-D movies lately, I didn’t think there was much in the way of 3-D going on in Up. I could have saved the extra two bucks a ticket and seen the regular version and not missed anything. While I applaud the advances in 3-D, I do want there to be an obvious reason for its use.

Overall, I guess I give Up a conditional recommend. If you’re prepared for the lengthy, and sorrowful, intro you’ll be ready for a good movie. If you go in thinking it’s all going to be a big jungle romp, you’re going to be a bit disappointed.
Posted by Cullen at 8:03 AM No comments: