Yesterday evening the Memphis area was besieged by tornadoes. They touched down in at least three places in the immediate Memphis vicinity. One of those areas was near a main shopping center/mall. J-mom happened to be right in that area when the tornado was heading that way. Was in that area to such an extent, she saw the funnel cloud begin to descend. She was running into a store right when it was touching down - things were beginning to fly in the air behind her. Freaky.

The shopping center she was in has two main areas. The side she was on was pretty much safe. Some stores had window damage and some cars in the lot had some damage. The other side of the shopping center was hit by the tornado. One store lost part of its roof, other businesses were hit. Kind of scary. The fact that she was right there when it was happening - freaky.

Here's a video showing the damage of the shopping center and the area J-mom was in:

Posted by Cullen at 5:48 AM No comments:

This quiz is crazy easy and, according to Pew (pew, pew pew!), I did better than 90% of the public. I like Pew and their methodology, but I really wonder about the validity of something like this. This is kind of unnerving. 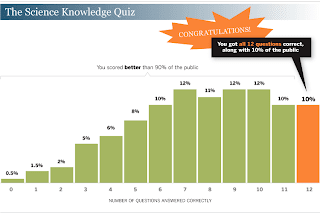 A good time was had by all 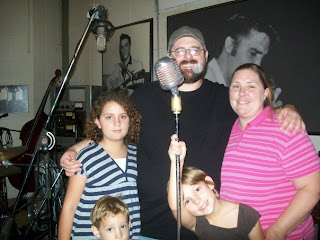 My parents came into town last Wednesday. They brought my girls back home after hosting them for three-and-a-half weeks. While here we did a couple of the tourist-y things that J-mom and I have been wanting to do, but haven't made it out to yet.

First thing we did was do a drive-by of Graceland. As expected, there were tons of people all around the area. What's surprising to me is how contained Graceland is. You'd kind of expect there to be more of a sprawl of Elvis-reltated businesses, but, no, not really. There are a couple of things right next to the house, but then you immediately go back into urban sprawl. We didn't go in, didn't even get out of the car. Just drove by, flipped around and drove by again. That satiated my urge.

We then went to Neely's on Jefferson. For all the hype and their Food Network blitz, I was left a bit disappointed. Mom and Dad and J-mom and I both got sampler platters that consisted of ribs, pulled pork, sliced smoked turkey and sliced beef. I felt the ribs were fantastic (the ribs on my parents' platter were not so good - overdone and chewy). Everything else was just OK. The pulled pork, especially, was not up to Memphis BBQ snuff. I smoked a shoulder the next day and was far more pleased with the outcome. But, it's another BBQ joint off the list. 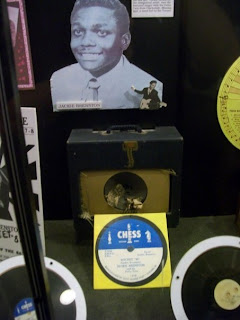 The next day we went to Sun Records. Wow. What a place. It just vibes history and music. They've done a very good job in protecting the studio (kind of by luck, if you look into the history of the place). You can actually rent studio time there for $100 an hour, including and engineer. That's peanuts for studio time. The actual tour is kind of short and there's very little to actually see. There's a small room with some of the studio's history on display. You spend most of the time there being talked through the Sun story. For a music buff, it was great. My kids were kind of bored, but they did very well. I was floored by some of the stuff - especially the broken Rocket 88 amp. To see so much history encapsulated in a single thing is always amazing.

After the history, you're taken into the studio to round out the rest of Sun's story and to see where the magic happened. It was such a cool-feeling place. We'll be taking future visitors there. The place is magic.

We had lunch on Beale Street, but we forgot that the Dyer Cafe was there or we would have eaten there. It can be hard living in such a food-centic city. So many places to eat, so limited resources.

It was great to see everyone again and to have the girls home. And any excuse to get out and see some of the city is a good one.
Posted by Cullen at 6:36 AM No comments:

This song's more apt than ever, huh?

Living Colour - Cult Of Personality
Uploaded by jpdc11. - Explore more music videos.
Posted by Cullen at 9:33 AM No comments:

Me: Nothing. I was talking to the toilet.
Posted by Cullen at 7:22 AM No comments:

This past weekend was my three-day weekend (I get a three-day every other weekend - compressed work schedules, how I love them). I am taking Thursday and Friday off this week because my parents are coming up to visit.

We're trying to cook up some things to do while they're here. The zoo here is nice and we need to get another annual pass. We were thinking about doing Graceland also, but I don't think our two youngest kids would do very well there. So, there's much still up in the air.

Today we find out if we'll have working AC for their visit (we'd better). The good news with the AC was that it was a lot cheaper and less labor intensive to fix than we originally thought it would be. The bad news is that our AC guy is still taking two days to fix the thing. He came out yesterday to install the new condensor unit and ran out of oxygen when he was soldering the line set. So, we had to wait another day so he could get a new tank. He said he'd be out today by noon. Hopefully we'll have AC before I get home from work. At least the temperature is still rather cool here. Yesterday was kind of warm (no where near seasonal averages, but warmer than the past few days) but today and tomorrow are cooler. The real problem is the humidity. Having to leave the windows open means everything feels damp - we are so ready for the AC to be working again.

Yesterday I had my final meeting for a summer class project. Technically summer classes have been out for two weeks, but we were still working on a group project and did our presentation last night. Could have gone better, but at least it's over. I now go into research, so I don't have to worry about class meetings or anything of the sort. I am only responsible to my committee. Speaking of which, for my project, I only needed two faculty on my committee and the two I wanted are both in phased retirement. My advisor told me that I shouldn't expect them to say yes to my committee request. I asked them not expecting it, but they both replied quickly saying they would gladly sit on my committee. It's going to be fun turning this research project around. I look forward to it.
Posted by Cullen at 7:27 AM No comments: 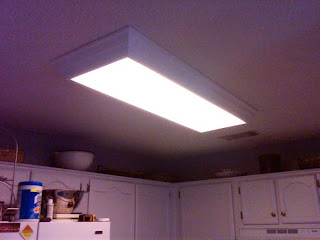 Installed a new kitchen light. A four-light florescent that's far too bright with all four bulbs in. So, we're just running two. 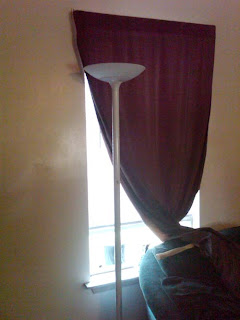 Another reason why Mickey Rourke is the man

The man asks for drink and a bird. And gets it.
Posted by Cullen at 7:03 AM No comments:

Happy birthday big man. May your head always be filled with fire (no I don't expect most of you to understand that).
Posted by Cullen at 9:43 AM No comments:

UPDATE: Whine, whine, bitch, bitch. I picked a bad HVAC dude and now I'm suffering the consequences. When the temp's in the 90s and the humidity is there too, getting your a/c fixed is an urgent thing. I chose the guy who could get it done quickly and I didn't have enough guys come out to quote. Lesson learned: Always take more time and always get more quotes.

Some unsolicited advice: If you have to replace your HVAC system, do not try and do the noble thing and hire a local dipshit. Go ahead and shell out the extra money and fucking hire Sears or some other big-name contractor. A/C still isn't working correctly and it looks like I'm about to have to eat another big charge. When the A/C guy put in the new system, he did not replace the old line sets. I have found a lot of conflicting information about this online, but on my end of things it looks like that might be where my leak is coming from. Replacing the line set is going to cost. But if I'd just gone with Sears in the first place, I wouldn't even be having this conversation because line set replacement was part of their replacement process.

Fuck me for trying to help out a local guy. I guess I should have known something was up when he was able to come out the same day when I first called him. I am really not sure where to go from here 'cause we're not even completely certain what the freaking problem is. I tell you this, though, I am almost 100% certain that if I have to replace something or do something that isn't part of his warranteed work, I won't be paying him to do it. Incompetent fucker.
Posted by Cullen at 3:48 PM No comments:

Of bowling balls and petrification

Help me spell my dog's name

So, her name is Ally, or Allie, or Alli, or Aly ... you get it. J-mom and I disagree over the spelling. I'm partial to Ally and she totally just spells it wrong (Alli).

Please look to the top right of the page and click on my handy dandy poll.

Your country thanks you. Oh, all right, I thank you.
Posted by Cullen at 11:56 AM No comments: 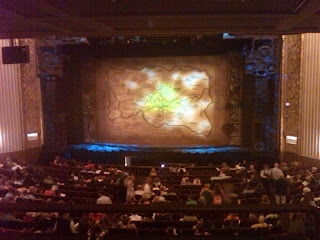 My lady love and I went to see Wicked last night at Memphis' Orpheum Theatre. It was a great show and was my first time seeing a show at the Orpheum. On a purely personal level, I was excited because seeing the show reminded me of the couple of years I spent doing community theater before I joined the Army. I kind of miss the manic energy and fun, but I don't miss all the rehearsing. So, it was fun to watch and reminisce.

The show itself was amazing. The sets were things of beauty -- with steam punk-influenced mechanisms and gears. Marci Dodd as Elphaba and Heléne Yorke as Glinda both were amazing. Yorke's manic energy put her at the fore whenever she was on stage, but Dodd's voice took center whenever she sang. The show was so solid that I'm hard-pressed to think of any low points.

If the tour is coming near you, I recommend it.
Posted by Cullen at 6:56 AM No comments:

This day, we are all British 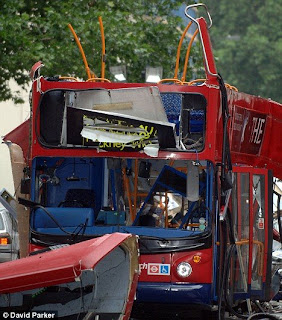 Four years on, we still remember.
Posted by Cullen at 5:50 AM No comments: 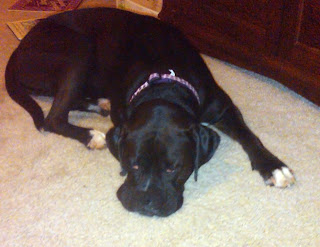 I miss my girls.

We went down to my parent's house in Louisiana on Friday to spend the holiday with them. They are also watching my two girls for the rest of the month. It's a thing my mom started last year -- she asked to take the girls for a month. It's something they all enjoy. But we do miss them, as you can see. 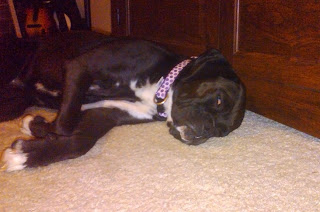 At the Red House

Someone tell me if this is real or not. I can't wrap my mind around this if it's for true.

UPDATE: After a little investigation of my own, it appears to be true. It also appears that High Point, North Carolina is home to many of the greatest bad commercials ever. Check out Daily Motion for the Cuban gynecologist auto salesman. That right there is comedy gold.
Posted by Cullen at 8:35 AM No comments: