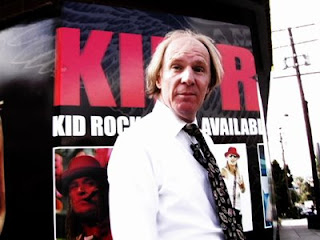 A couple of weeks ago I caught a documentary on one of the movie channels called New York Doll. Figuring (correctly) that it might be about the New York Dolls, I figured I'd click over and give it a go.

The New York Dolls weren't, well, I guess considering their revival I should say aren't a band I ever followed closely. I've heard plenty of their tunes, really dig a lot of it, and realize full on they're the musical model upon which Malcolm McLaren based the Sex Pistols (just listen to Lookin' For a Kiss and tell me that the Pistols didn't rip their sound from the Dolls – hell McLaren even managed the Dolls for a while, as I’m just discovering). Other than knowing that Buster Poindexter was really David Johansen (the Dolls' lead singer) I didn't really know a hell of a lot about the band.

So, I thought I'd give the movie a shot. I clicked over (I missed the first 20 minutes or so) and here’s this bald dude in a white dress shirt, black tie and name tag speaking extemporaneously into the camera. I almost changed the channel, but something about that name tag made me pause. And then they did a cutaway to another person. The subtitle below this person had his name and title: Arthur’s former bishop. It clicked then! This dude’s a Mormon!

I’m not. But my wife is. And I’m no subject matter expert, but I do have a vested interest in these things, so outside of my already somewhat piqued interest because it was about a New York Doll, the addition of the LDS tie held me rapt. So, I settled in and even hit record on the DVR.

There’s a lot of disaffection in the tale. I didn’t know the outcome of any of the Dolls other than Johansen’s somewhat mediocre career in the ‘80s under his Poindexter pseudonym and that guitarist Johnny Thunders had died of a heroin overdose. I didn’t know much of anything about any of them, really.

We’re used to tales of rock and rollers. The Decline of Western Civilization parts 1 and 2 (and now 3) set the stage for the rockumentary that is now part of our common conscious. I was expecting a story about the rise to stardom, the tragic fall, and the “where are they now?” to come out like the spoon-feeding most sitcoms give us every night. What I got instead was this meek man, someone who found his place in the world with the LDS and the work he did in their family history center in L.A. I’m not here to write about the church. I don’t even really want to discuss it. You are welcome to your opinions, I have mine. What is clear to me from this film and from what I’ve read on the subject since is that the church saved this man’s life and offered him something that no one else had in a long time – a sense of purpose.

But that’s not the film’s story. That’s just the backdrop. Here’s a balding, washed-up, has been of a guy who no one would realize was once rocking faces world wide and he’s finally found peace with that fact. However, his world is changed when he gets a call. A call from mutha-freaking Morrisey.

I am not a fan of the Smiths. I was never fond of Morrisey’s stuff (other than How Soon is Now and you don’t have a soul if you don’t like that song), but it just wasn’t my scene. I was in the harder stuff and, more truthfully, Morrisey fans annoyed me more than their music. But here he is, on this documentary, putting together a music festival in London trying to get the Dolls back together to perform.

That’s the story. A changed man. A man who has found his peace and forgiveness, but has never lost his desire to get back up on stage and rock again. He spent years trying to reform bands and never stopped playing until he became so destitute he hocked most of his gear. There’s a great part of the movie when he’s getting ready to go to England, he goes to the Pawn shop to get his basses and they cutaway to one of his friends who says (I’m paraphrasing from memory, but essentially):

All this time I keep waiting for the collapse, because in my heart I don’t believe in these kind of real stories having happy endings. But it all plays out. The band reforms. They rehearse. They make it to England. They play. They rock.

The biggest issue here is his reunion with David Johanssen. The film takes great pains to make it clear that Kane blamed Johanssen for the Dolls’ disintegration. He viewed Johanssen’s success in the ‘80s and early ‘90s with contempt. He felt robbed. There was a train he was riding and he didn’t get off by choice, he was thrown.

There might have been some truth to this. I don’t know. The film doesn’t give insight. Nothing I’ve been able to find online really says who’s to blame for break up. Really, after Thunders left the band, it was probably all over anyway. But Kane couldn’t blame him, he was dead.

And yet, Johanssen walks in on the second day of rehearsals and they play a couple of songs and the first thing he and Kane do when there’s a break in the playing is hug it out. It was an amazing moment to me because Johanssen represented the success that Kane felt he was owed. There was contempt there. There was hate there. But he had found his redemption and showed that to Johanssen. It was interesting because the movie points out through several interviews that it was like Kane and Johanssen picked up where they left off and the years of separation and hatred never existed. The interviews help, but the feeling is apparent in how the two treat each other in the film from the meeting point on.

And then the concert ended and Arthur chose to go back to L.A. and return to his volunteer work at the LDS Family History Center rather than do future tours with the Dolls. Twenty-two days later he fell ill and was diagnosed with leukemia. He died two hours after diagnosis.