Because I am all about the guitar Pt. 2

I love the guitar. I love listening to it. I love watching someone good play it. I love just looking at well crafted guitars (visit here for some cool projects), and I love owning the instruments. I don't play very well, though. I'm self-taught and although there was a time I was getting good, I took several years off from playing and my skills depreciated greatly.

There is something remarkable about youth. You have time to invest when you have no real responsibility. And you seem to just absorb things and skills are sharpened quickly. Not quite so as you age and you split yourself into 80 different tracks of thought and action. So, anyway, I suck at playing guitar. But I still love it and there was a time I didn't think I sucked. At least not anywhere near as bad as now.

The first time I ever thought, "Hey, I'm getting pretty decent at this," was shortly after this album came out: 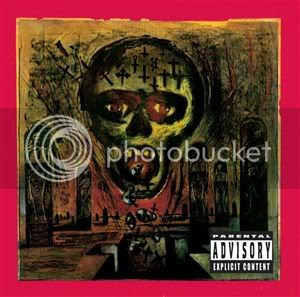 As a late '80s, early 90s metalhead, you looked forward to the "big guys" putting out new albums. Metallica, Megadeth, Anthrax, Iron Maiden, Suicidal Tendencies and SLAYER. Slayer were the heaviest, fastest guys around at the time. They didn't play the best, they weren't the best musicians, but they wrote very cool music. And Seasons in the Abyss is the culmination of years of work on their part. The band members said that this album combines the heaviness they always possessed with better melodies they had been trying to incorporate the previous two albums. This is not my favorite Slayer album. I actually think that one of those two previous albums -- Reign in Blood -- is their best, but this album will always be special to me.

A friend of mine got his hands on the tape shortly after it came out and I was able to get him to dub a copy for me. And then, over the course of one Saturday, I sat in my room with a walkman and my guitar and learned to play every single song on this album. In order.

I had a couple of issues here and there. I didn't do solos (still don't), but I nailed down all the rhythms. I stepped outside my idea of how to play certain ways and developed new skills so I could play at their speed.

One day. I dissected this album. It was great. From the punch-you-in-the face assault of War Ensemble to the eerily dissonant Dead Skin Mask, I pounded out these tunes on my piece of crap Quantum electric guitar. You can't even find this guitar on Google. It was so underground. You can find a review of their amps on Harmony Central.

I actually still have the guitar body but have no idea what happened to the neck. I currently trying to piece together some of my old parts to make this a working guitar again. Once I get the project back on track, I'll probably post pics of progress, etc.