One of the most amazing sights you can ever see is hundreds of thousands of people together to watch and participate in the world's largest tug of war.

This is, of course the history of the event, but the reality is that it's a HUGE party steeped in really cool heritage and a lot of traditional costumes. When I first heard about it, I thought it was a joke. "A huge tug of war? What could that possibly be like?" I wondered. Well, it is amazing.

The following shots were taken in 1997, the first year Naha won the Guinness World Record for the largest tug-of-war. As always, click on the images for a larger view.

The event starts with two sides of the rope split. One side on the east, the other on the west. There are huge loops at each end of the rope, to bring them together. Once in place, they are secured with a 10-foot wooden post. There is a large square in the middle of the streets and a huge ceremony preceeds the tug-of-war. There are martial arts demonstrations, as well as dancing and the reading of proclamations. 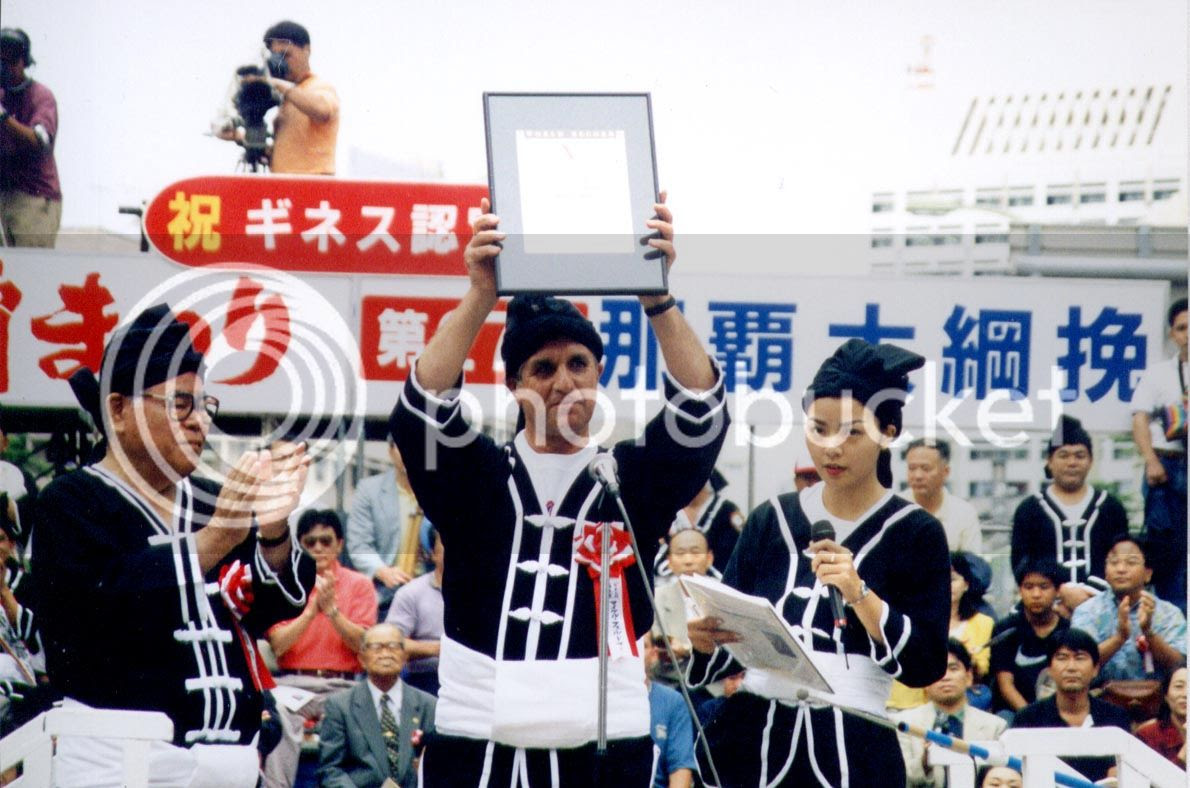 This year, as I said, the Guinness people were on hand. Here, a Guinness representative presents the mayor of Naha with the World Record certification. These events always took two to three times longer because of the dual language nature. Having such a large English-speaking presence, the Okinawans were mindful to have everything translated both ways. Thoughtful of 'em, I thought. 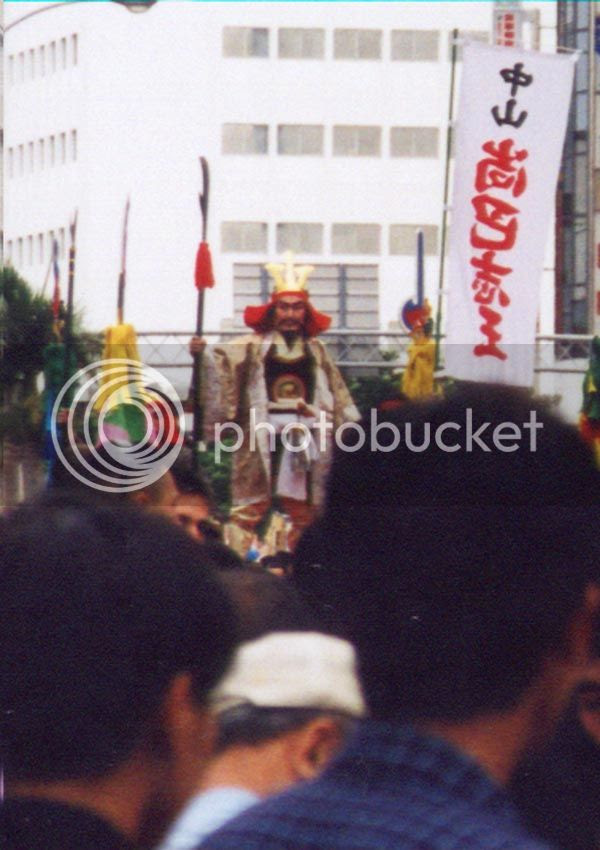 You know the tug of war was getting close when you saw these guys. They stood on platforms that were carried above the sides of the rope and were brought to the center. Each represented a side of the city. I thought I had a better picture of the gold guy, but I couldn't find it. All these pics were hard copy and I had to scan them in. The purple guy is awesome though. Sometimes I remind myself that I'm decent at this photography thing now and then.

It's quite a thing to see them just kind of "float" down the line. I believe they are supposed to represent the shoguns of the respective sides of the city. Shogun being the warrior ruler. Today I guess we'd call them rival gang lords or something. But more official. Notice the distinct colors. Those ancient Okinawans knew how to represent. 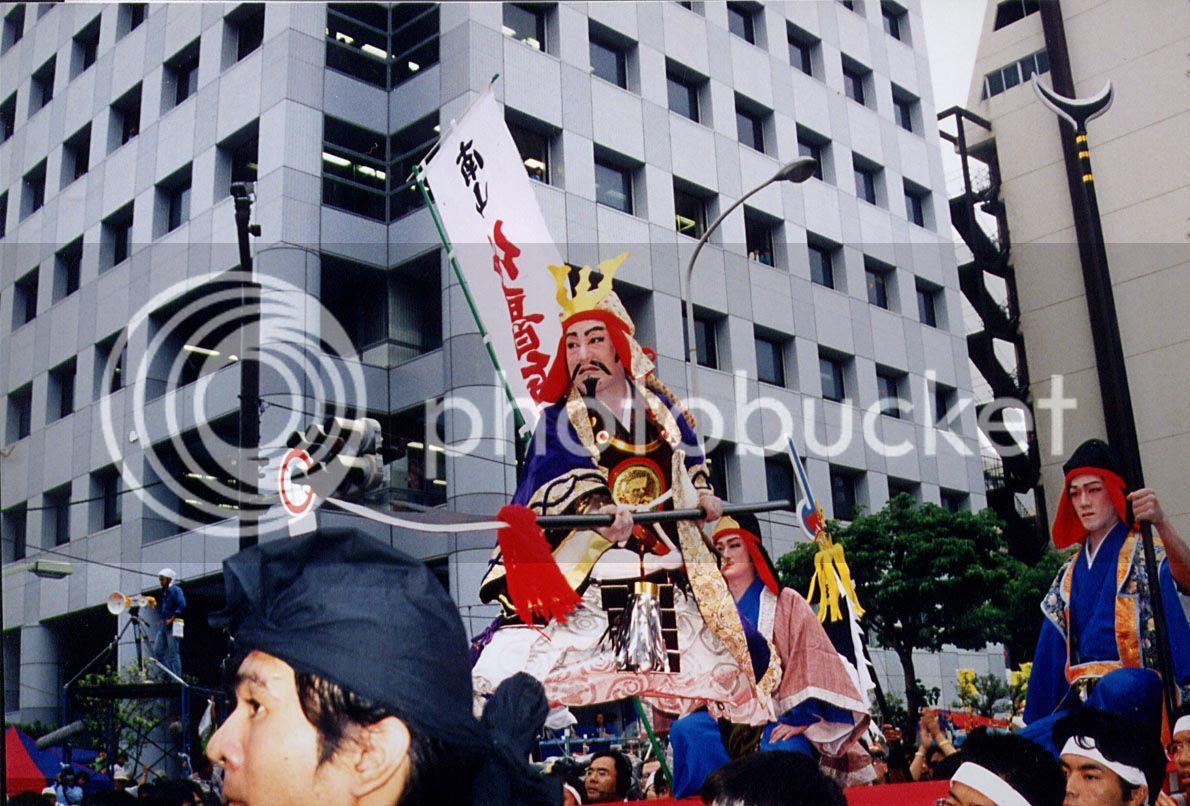 So, once these guys made it to the end of their respective sides, they would then yell at each other and do all kinds of martial arts kata.

Japanese-style smackdown. It is interesting to note that Okinawa was the home of some of the most respected forms of karate: shotokan, shorin ryu, uechi ryu and others. They were influenced both by Japanese karate and Chinese martial arts. They incorporated their own weapons (farm instruments mainly). Very neat stuff. 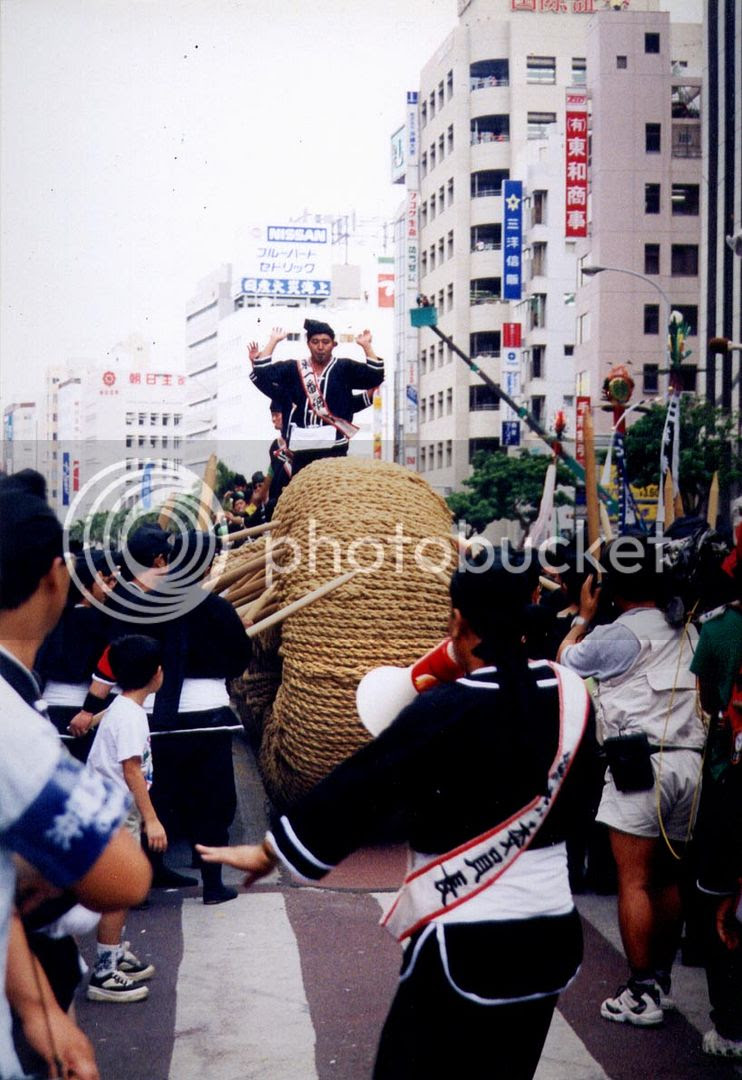 Once the shogun are done they bow and back away. The the ropes are moved to the center of the square to be put together. This process is amazingly time consuming and takes hundreds of people. You can see in the photo they use these long, pointed poles to push the rope hundreds of feet to be joined together.

Oh did I mention that this thing weights about 40 tons total? So, 20 tons a side. Being pushed with a stick. How cool is that? 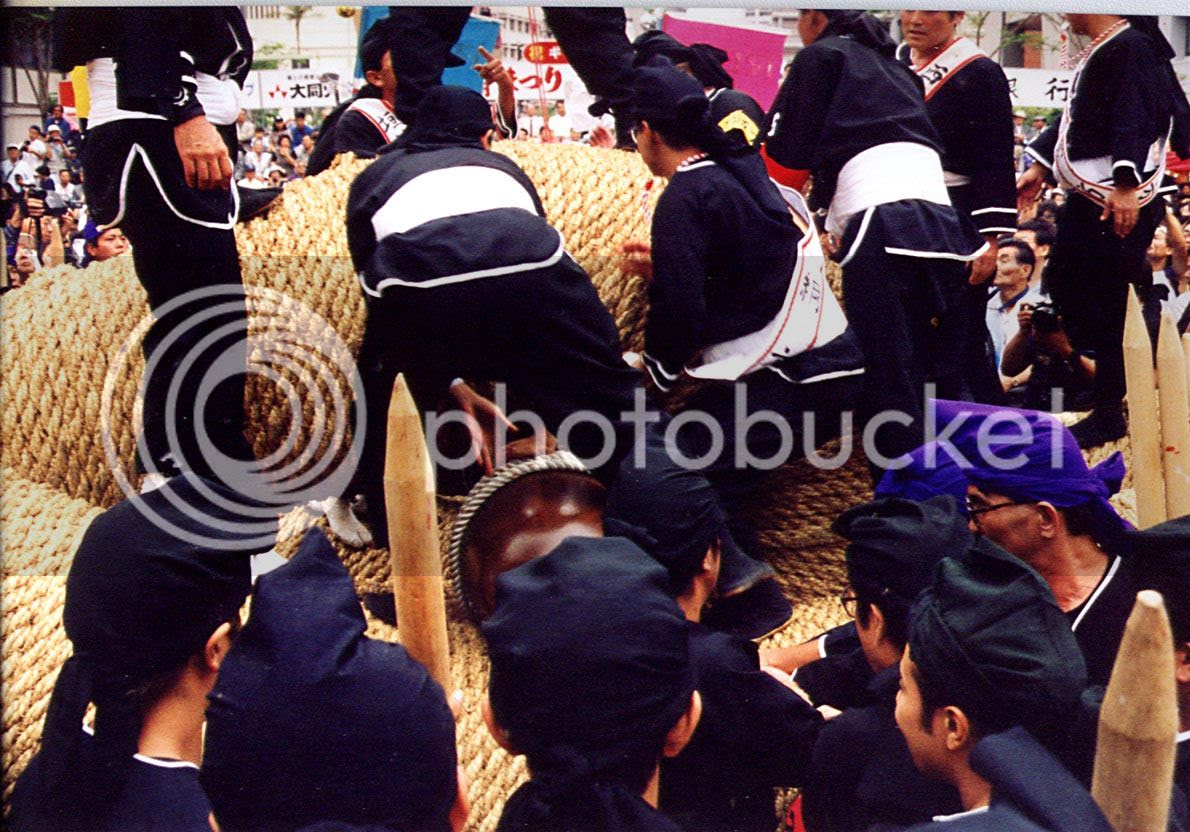 But, they push and they pull and the move it and nudge and talk about it and say "Hai!" a lot and push and pull some more. 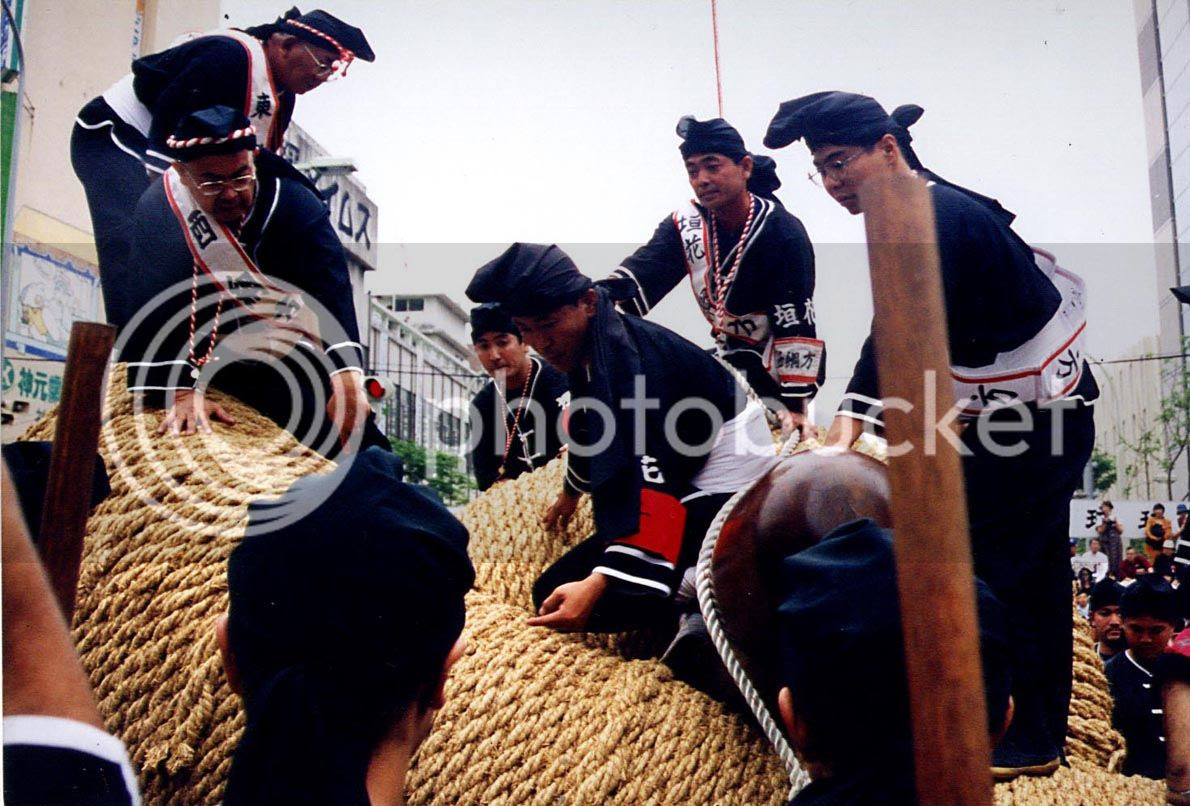 Eventually they get the thing where they want it and can get that damn huge post through both loops. 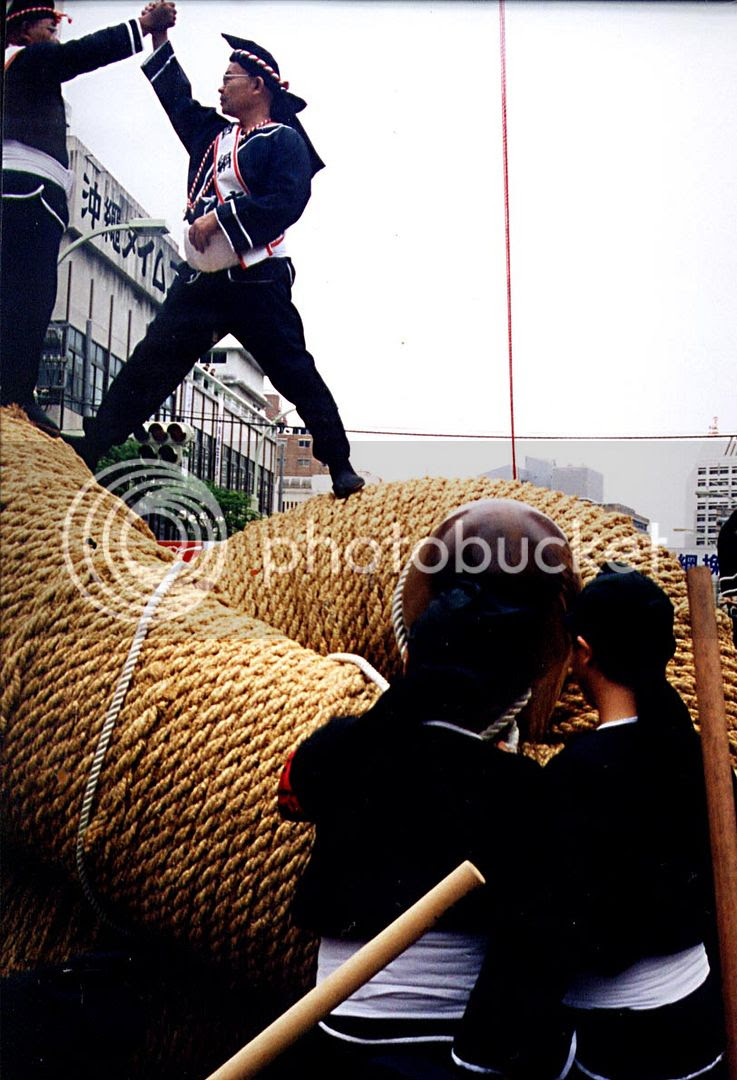 As you can see, once all that effort is done and the two old guys give each other the high-five, it's Miller Time! Kampai! Oh wait, no, there's still a tug-of-war to take care of. Okay, the saki and Asahi can wait. 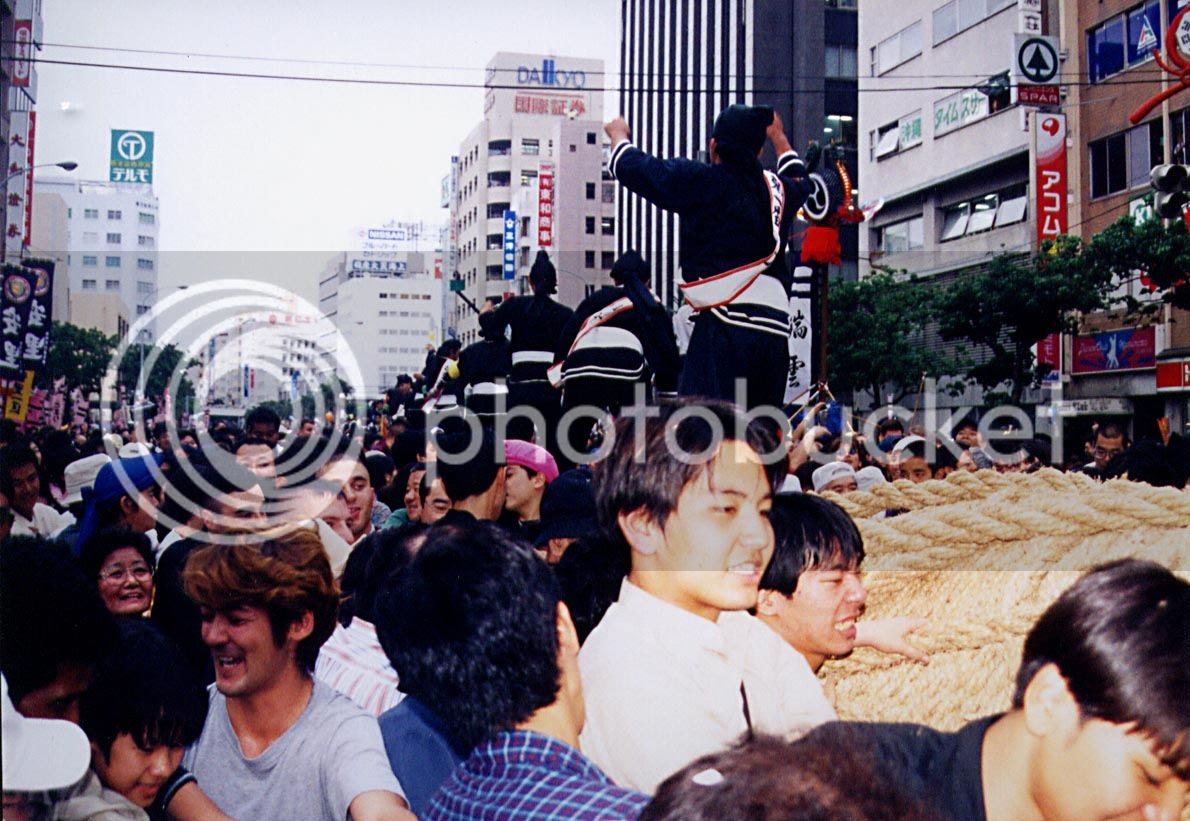 And then they're off. The guys standing on the ropes act as coaches and get the folks to yank on the ropes? How? Well, as the photo shows, there are a bunch of little ropes hanging off of it. Look at the guy in the lower right on the photo. See that face ... he's working it. Like his extra effort is gonna help move that 40 tons. Funny stuff. What's really neat, I think, is the multi-cultural nature of this thing. You see American miliary mixed in with the Okinawans, but it's also a huge tourist event so there are Australians, Chinese, mainland Japanese, folks from Hawaii ... it's really, really a huge event. 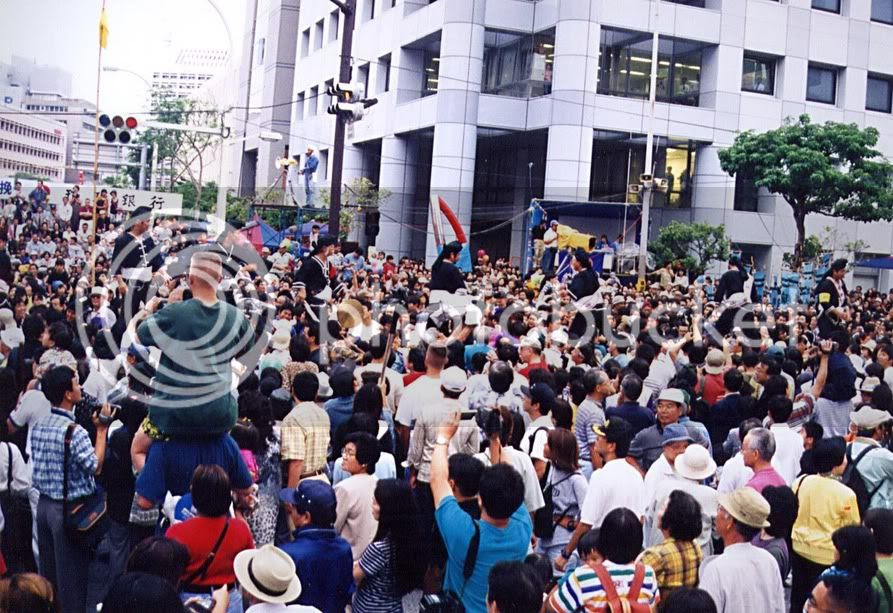 This crowd shot gives you an idea of the depth and breadth of the crowds. The year prior, I shot the entire event from the top of one of the buildings on the square. I got some good overall shots and I wish I copies of those photos. But for getting right up in the face of event, I was glad to be on the ground.

Oh, I'd also like to point out that to get this shot, I had to just hold the camera way over my head and trust auto focus. Pretty nifty, if I do say so myself.

I hope you liked all the shots and the neat slice of culture I presented here. This was a more timely piece than I realized. The 2005 festival was held Oct. 9.

For more information on the Tug-of-war, here's an article from JapanUpdate.com. For some quick info on the city of Naha, here's the Wikipedia entry.
Posted by Cullen at 11:20 AM