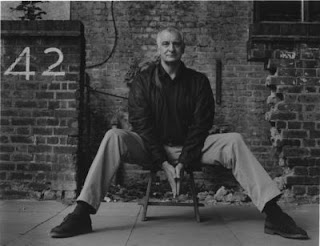 I first learned about Adams’ work from a friend. This was, oh, ’86 or ’87. I was at his house and he asked if I’d ever played the Infocom Hitchhiker’s Guide to the Galaxy game. Not only had I not played the game, I had no clue what HHGttG was. I quickly learned. After playing the game endlessly at his house, I found the books at the library. Then I found the radio scripts and the radio show. Then I found the BBC miniseries. I was hooked – a fan for life.

Looking back on HHGttG now, there are certainly some dated references. Some of the humor was structured to make fun of things happening then or social mores of the time. But it doesn’t lesson the impact. It’s easy to understand that digital watches can just as easily mean cell phones or tablet computers. The concepts are sound even if the references sometimes aren’t.

Considering the Guide itself, Adams was a visionary. He didn’t just envision the Guide as a tool for his fiction, he genuinely thought about having an electronic compendium of man’s knowledge accessible from portable devices. It sure didn’t take long for that vision to become a reality and every Kindle and iPad and like device brings the Guide closer to parity with the books.

The Dirk Gently books came along shortly afterward and while it didn’t resonate with me like HHGttG, it was still Adams. It was still great. The way he wove humor into plot was brilliant. No one does it quite the same way.

As a fan, you find yourself wanting more. That’s the reason another HHGttG book was published and Artemis Fowl author Eoin Colfer was tapped to write it. This book not only didn’t resonate with me, it just wasn’t the same. The pacing was off, the humor wasn’t as good or too different … It’s just not a world someone can come in and start writing in again. HHGttG was something unique to Adams and unlike the worlds of James Bond or Cthluhu, the adventures of Arthur Dent and crew don't lend themselves to having their torch carried by anyone else.

We fans, we need to be satisfied with what we have. I hope for everyone’s sake that we don’t have another book. Maybe we can figure out a way to make a better movie, but I’m not holding my breath.

P.S. boPAD is because that's what his signature looks like:

Hey Cullen! All of my sons have been avid readers. #2 son, who is now 27 years old became fascinated with HHGTTG when he was in high school.

He became a true fan of Adams. One night he was telling me all about it. I never picked it up to read, though...busy with other stuff, I guess.

Even though Ross has long been a grown man, he is still a fan, and took HHGTTG with him when he moved away from home. Thanks for reminding me.

I remember plowing through the Hitchhiker's Guide books in 8th/9th grade, and then found a classmate whose older brother had the BBC series on tape. Good times.

Pan-Galactic gargle blasters are the bomb. And I'm voting Zaphod Beeblebrox in 2012.

I spent my senior year of high school and the next few years on the Mississippi Gulf Coast. Of course we went to New Orleans often.

There was this bar on Decatur I used to go to after concerts and such. They had this female Italian bartender who was a lot of fun. One night we went there after a show and I got a Long Island Iced Tea. I downed that pretty quickly and asked her, "Can you make me something stronger?" She says, "I'll make you, um, what's it called, a Pan-Galactic Gargle Blaster!"

I was very excited. She made the drink. I took a few sips and wound up dropping the drink straight on the ground. She made me clean up the glass, but also made me another drink.

HHGttG is terrific stuff... as long as you stop at Book Four.