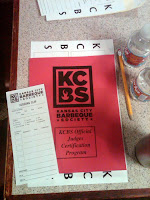 Whew! There were many things barbecue going on for me this weekend.

First, on Saturday I attended a Kansas City Barbecue Society Certified Barbecue Judge class. Participants are or become KCBS members are after completing the class are certified to judge KCBS-sanctioned barbecue contests. You get to eat a good amount of barbecue in the class, too. That's a plus!

I have already e-mailed eight different contests nearby to see if I can get in on the judging team. It can be difficult to get into a contest - you can imagine, people are always wanting to eat barbecue! - so the earlier you get a hold of folks the better. I need to contact a few more. I'll be happy if I just get to judge two or three.

Secondly, the parts for my smoker came in Wednesday and I was able to inaugurate it today. I put a brisket on at 4:30 a.m. and cooked a few ABTs (explanation forthcoming). 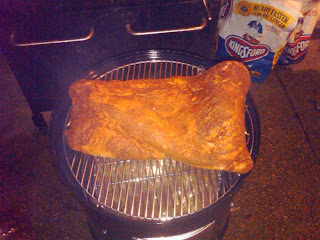 The brisket was pretty big - right at 16 lbs. It was pretty fatty though. I must have trimmed at least three pounds of fat from it. It was long though. You can see on the right-hand side that I had to fold one side under - in fact I had to do it a little more than this so the meat didn't touch the lid. 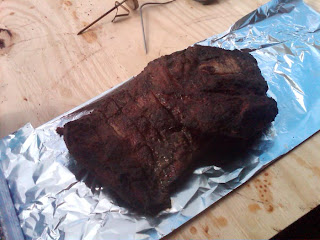 I cooked the brisket at 225-235 for four hours. Then foiled it and tried to keep the temp in the 240 - 250 range. It's amazing how well the Weber Smoky Mountain both keeps temperature and is easy to adjust. It really is a set and forget cooker. I cooked the brisket until I got an internal temperature of 205F. A total cook time of 10 hours. Moist, tender, but not mushy. It was the best brisket I've ever cooked and one of the best I've ever eaten.

After I pulled the brisket off I put on the ABTs: 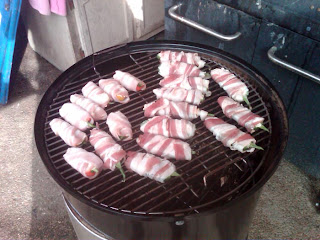 This was my first time cooking or eating these things and THEY. ARE. AWESOME!

Here's the recipe I followed: Atomic Buffalo Turds - Cream cheese, pulled pork and barbecue rub. Jalapeño Peppers and Bacon. Simple huh? I mixed the cream cheese, pork and rub in my Kitchenaid mixer. It broke the pork down and spread it out evenly and distributed the rub nicely. I couldn't have done anywhere near as nice a job with a mixing spoon. The cream-cheese filling itself is wonderful.

Cut the peppers in half (use gloves!) and scrape out the seeds and membrane. Fill with the cream cheese and wrap with a slice of bacon. Use a toothpick if necessary. I didn't need to. 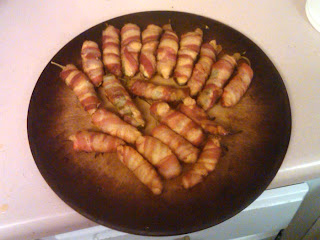 Don't those look wonderful? You have to cook them over a relatively low heat so the peppers get tender and the bacon fat renders. I cooked them in the WSM for a couple of hours and then threw them in the oven under the broiler for a couple of minutes to crisp the bacon a bit more. Done properly, everything just melts in your mouth and the flavors will bowl you over. Amazing!

All-in-all, a great weekend with a lot of good food!
Posted by Cullen at 6:32 PM

great to hear it all worked!

i tell you, once you start making abts you never stop.

i make 'em with anaheims and cubanelles and jalapenos.

they are so awesomely amazingly yum, natalie.

I cooked them in the WSM for a couple of hours...

I read this sentence and for a second I couldn't understand what the mainstream media had to do with your barbeque.

Man, I need to stop reading political stuff for a while...

During the "interview" part of Jeopardy! the returning champ was talking about being a certified barbecue judge--I went, "Aaah! Cullen!" :)