Because I’m All About the Guitar Pt. 15:

Who is responsible for making Stax Records a viable recording house? Booker T. Who is a founding member and driving force behind Booker T. and the MGs? Who has recorded for or produced albums by Poco, Jeff Beck, Jose Feliciano, Yvonne Elliman, John Prine, Dreams, Tower Of Power, Paul Simon, Ringo Starr, Buddy Guy, Johnny Lang, Elton John and Steppenwolf? Who was the original guitarist for the Blues Brothers? 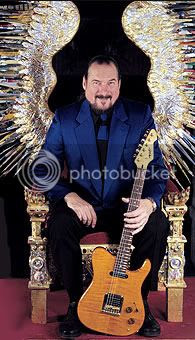 There are so many songs and albums that Cropper has played on that you know but didn’t know that it was him. In 1996, England’s Mojo Magazine rated him the second-greatest guitarist behind Jimi Hendrix. He was also voted #36 in Rolling Stones 2003 top 100 guitarists of all time.

“The Colonel” has a signature line of guitars through Peavey. Very well thought of by many guitarists.

Take some time to learn a little more about the man at his website.
Posted by Cullen at 7:00 AM