Duct tape doesn’t solve all problems Pt. 3: Finally, where all this is going

Parts one and two are below this. Read them first.

One such rifle range occurred shortly after the battalion and our PAD returned from the National Training Center at Fort Irwin, Calif. Army units deploy to Fort Irwin to “play war” against the opposing forces there. It’s armor-based training in the middle of the desert.

Getting units’ equipment to NTC is accomplished a couple of different ways. Generally, most the vehicles and equipment containers are rail loaded. That is, they are driven onto train cars and then transported out there. There are circumstances where equipment is flown out, but that is very rare. What is more common, if equipment needs to get out more quickly than the rail, or if it misses the rail, it is line hauled -- loaded on flat-bed tractor trailers and driven out.

The one, and only time I went to the NTC, we had less than two weeks to prepare and go. We were an afterthought and we had to jump through hoops to get out there. To get our equipment out there in time, we line-hauled our two HMMWVs. This is the lesson of the story: if you are in the military, or if you ever have occasion to haul a vehicle with canvass tops across the country, take off the freaking canvass!

When we got to NTC, one HMMWV was missing the rear cargo-area canvass and had substantial damage to the front, passenger-area canvass. Either the canvasses weren’t secured for travel or the wind just picked up a weak area … they got ripped up. 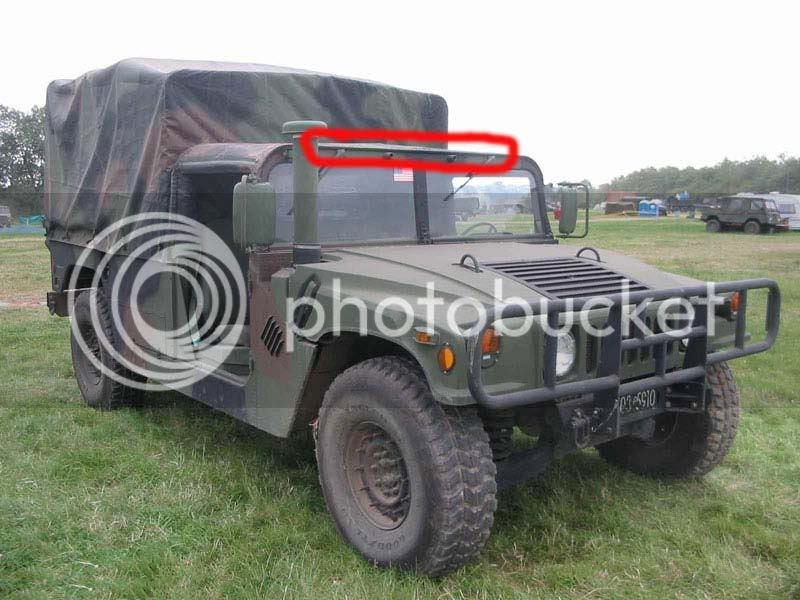 So, back at Polk, weeks later, we’re having to do all this tactical travel in HMMWVs that aren’t technically able to be used. We had cannibalized the best canvasses onto one vehicle, but during the course of NTC, the front canvass ripped at the front, just above the windshield – see the circled area of the photo. However, we had to get out to the range for our one day of shooting. A soldier’s mind can be a dangerous thing; we had to work with what we had and ripped canvass met camouflaged duct tape and the military’s version – 100-mile-an-hour tape.

Picture this: Five soldiers at 5 a.m. doing their pre-combat checks for all the appropriate gear, weapons, MREs and freaking tape. It was a mess. A big, honking, aggressive, intimidating military vehicle with a huge mass of green and camouflage duct tape all over the top.

Driving to Alexandria from Polk takes about an hour in a civilian vehicle, so it takes about an hour-and-a-half in a military vehicle. About half-way there, the tape begins to lift. “Um, Specialist J*, could you hold down the canvass so it doesn’t fly up,” I holler, because you can barely hear shit in a HMMWV under the best of circumstances. We wound up pulling over and taping it down again. It barely made it.

While at the range, we reapply tape liberally. It looks ridiculous. I take the opportunity to point this out to the maintenance sergeant there who is supposed to be ordering new canvass for my HMMWVs.** He shrugs it off. He is still a bastard in my eyes.

We all shoot. We all qualify. We get ready to leave and pick up an addition passenger – a senior-ranking NCO. I was driving; I didn’t want any of my soldiers to have to worry about the canvass.

Halfway home, that senior NCO and I kept a hand on the canvass. The freakin’ tape just couldn’t hold the shit down.

I first began telling this story to relate a humorous “Ha ha, we had to drive a lot holding down canvass, how funny,” kind of story. It turned into a lot more because I realize that this event means a lot more to me and serves as an allegory for military service.

*Oddly enough, she shared my last name (by marriage) and her home town is within an hour’s drive of my family’s stomping grounds, but her family is no relation.

** Which never arrived during his stay. He moved to another installation long before we got our canvasses – over a year after we returned from NTC.
Posted by Cullen at 11:24 AM