Because I’m All About the Guitar Pt. 23: Rob Zombie’s Educated Horses, a review

The kids have been on spring break this week, so I took tomorrow off to do the kinds of things kids like to do when dads take the day off to spend with them. Since the carnival’s in town, that probably means spending great amounts of time standing in lines for a few second’s worth of excitement, eating really greasy, overpriced food, and probably getting a sunburn on some part of my body.

But I love it.

So, I’m posting my next BIAAtG installment tonight rather than Friday. Without further ado, Rob Zombie’s Educated Horses review: 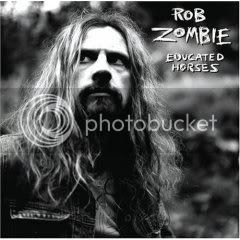 I have a like/dislike relationship with Rob Zombie’s music. On the one hand, I am really fond of a lot of his music, and I like the horror movie subject matter. On the other hand, I'm not very keen on a lot of of his commercially inspired music.

When White Zombie first hit the scene, I was really into it. It was a return to the “monster rock” that The Misfits and The Cramps had made famous, but no one had approached again (with any success anyway) until Zombie came out.

Their rhythms were solid, the grooves infectious and his voice memorable. They were a hit. Later, Zombie branched out solo and introduced more sampling and electronica into his music. He started out solidly heavy metal/hard rock and became, technically, industrial metal. While industrial metal purists will argue that point – if it looks like a duck, sounds like a duck and damn well flies like a duck, it’s a freaking duck. It was probably around this time that I stopped really caring for Zombie's work.

Rob Zombie filled a niche with his solo work that the public needed filled. With Ministry failing to follow up Psalm 69 with anything decent, longtime industrial fans found themselves grooving to Zombie in their place. And he did a good job. Songs like Dragula infected pop culture creating huge crossover success for Zombie.

His previous works always delivered great grooves and something that is going to be a very big issue with this review -- dynamic tension. He would set a mood and take you up and down and sideways and back and forth across the spectrum of anger, lust, depression and hatred. And that’s where this album fails.

With Educated Horses, Zombie takes us down a lot of familiar paths. There’s no new sounds here. His typical whisper-raw voice permeates the album. The problem is that he never goes above this or below it. The album is set at mediocre and never leaves that spot.

The album opens with an instrumental, “Sawdust in Blood,” that is very reminiscent of the Terminator theme song. So much so that I was about to start searching the phone book for Sarah Connor. The album never waivers off that point of mediocrity. When the next track, “American Witch,” cuts in, you think you’re going to get something more – it’s heavy – but dull. Just repetitive nonsense. The very thing that techno/industrial detractors have complained about the genre being.

“Foxy Foxy” is next up and is really the title track of the album and you want to like the song. But it winds up being one long tease. It keeps building up to something huge that never happens. You expect some huge Trent Reznor-esque screaming fit that never materializes. What should be the biggest thrill of the album leaves you frustrated.

Honestly, it goes downhill from there. “The Scorpion Sleeps” has a couple of moments, “Death of it All” is probably my favorite track (a slow, bluesy, “going to hell” kind of song), and the lowest point of the album is probably the song “The Devil’s Rejects” tying into his movie of the same name. I loved the film, however this level of cheese is going too far – “Hell doesn’t want them. Hell doesn’t need them. Hell doesn’t love them.”

If I were rating it in stars I would probably give it two out of four. I guess it might be good to dance to, if You’ll dance to anything …