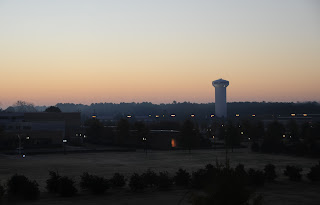 Despite all accounts to the contrary, the sun did rise this morning. This is the view from my office window at about 6:15 a.m. A little earlier in the morning and it's even more dramatic.

*Wasn't that the name of the fictional soap opera in the Jonn Candy film, Delirious? What a funny movie. UPDATE: Of course, I totally mixed up the titles. The name in the movie was The Sun Also Sets, I'd like to say I was making an attempt at being clever about them being clever, but I just screwed it up is all.
Posted by Cullen at 6:29 AM