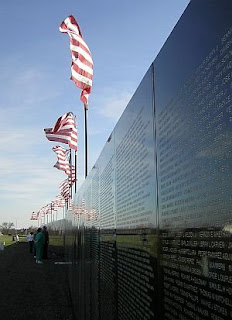 I usually try and do something interesting on Veterans Day. Last year we did a hike in a nearby nature park. This year, we're having some missionaries from the church over for lunch.

It's a pretty moving day for me. There are a lot of veterans in my family, including myself. And, while this is day for thanking those who gave, I still think of those who gave it all and paid with their lives to ensure that we can live the lives that we do. But more than that, we also try and spread democracy and hope to the world. That's not a very popular notion today, but I think it's more important now than ever. If we don't try and get the world to think like us, it's likely that they'll think against us. It's happening. I fear for the future. However, as long as there are brave men and women and we don't undermine the armed forces, we'll be secure.

The Uniforms Holiday Bill (Public Law 90-363 (82 Stat. 250)) was signed on June 28, 1968, and was intended to insure three-day weekends for Federal employees by celebrating four national holidays on Mondays: Washington's Birthday, Memorial Day, Veterans Day, and Columbus Day. It was thought that these extended weekends would encourage travel, recreational and cultural activities and stimulate greater industrial and commercial production. Many states did not agree with this decision and continued to celebrate the holidays on their original dates.

The first Veterans Day under the new law was observed with much confusion on October 25, 1971. It was quite apparent that the commemoration of this day was a matter of historic and patriotic significance to a great number of our citizens, and so on September 20th, 1975, President Gerald R. Ford signed Public Law 94-97 (89 Stat. 479), which returned the annual observance of Veterans Day to its original date of November 11, beginning in 1978. This action supported the desires of the overwhelming majority of state legislatures, all major veterans service organizations and the American people.

Veterans Day continues to be observed on November 11, regardless of what day of the week on which it falls. The restoration of the observance of Veterans Day to November 11 not only preserves the historical significance of the date, but helps focus attention on the important purpose of Veterans Day: A celebration to honor America's veterans for their patriotism, love of country, and willingness to serve and sacrifice for the common good.

So, when Veterans Day falls on a Tuesday, many of us get four-day weekends! Hooray!
Posted by Cullen at 9:27 AM