Because I'm All About the Guitar Pt. 10: What's in the Wood? 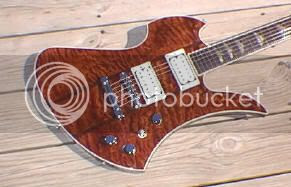 Wood for your guitar. This is a highly complex and emotionally charged topic for guitar players and builders. Folks have tried to use physics to explain the uses of wood, others use mojo. Some build for economy, others build for looks. I simply cannot go into all the ins and outs of this topic, I'll only be able to barely brush the top of the surface and only give my impressions and opinions. And only on electric guitars.

The wood chosen for a guitar is pretty important for a variety of reasons. Some of those reasons involve the actual building of the guitar. Like: How well can this wood be worked, or is the wood strong enough to be used for this? Then there's issues of how wood effects the sound of the guitar, and thats where the high emotion lies.

All of the building materials for a guitar, wood especially, directly effects the vibration of the strings and their resonance which directly effects the quality of the sound. This is especially true of an acoustic guitar since you're hearing unfiltered sound, you're hearing naked wood, as it were. In an electric, the pickup does all the work and it is (generally) not microphonic. That is, the pickup doesn't "pick up" the sound of the strings, it picks up the vibration of the strings. This vibration creates a signal in the pickup which is translated to sound.

You might think then that any wood of similar resonant frequency should create guitars that sound the same. Well, I don't know why, but it's not true. Anybody can pick up an Alder body Fender Strat and a Basswood body Strat and hear a subtle difference in tone and color even though the two woods are very similar in grain, weight and resonant frequency. If you ever want to test this out for yourself a strat is a great guitar to use, because they are essentially an assembly line, cookie-cutter product. One of them is going to be very similar to another.

What makes this subject even more complex is when you begin to realize that two guitars, using the same wood, with the same hardware and electronics and similar finishes sound different. Even wood from the same tree isn't necessarily the same. Some is more dense, some has tighter grain -- it's a crapshoot. But there are some generalities and I'm gonna list some of my favorites woods here and some of their supposed tonal qualities: 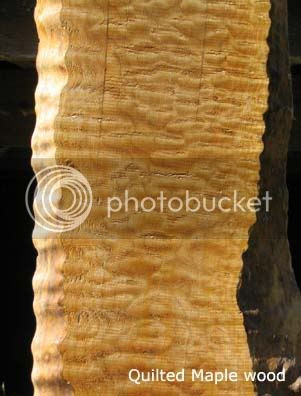 Quilted or Curly Maple: Quilted Maple is a rock maple tree that has a wavy or curly appearance. No one knows for sure why the trees get this look to them. Maple is a heavy wood and the non-figured rock maple is usually used in guitar necks. Quilted maple, along with it's cousin flamed or tiger-stripe maple, is used primarily as tops for guitars. 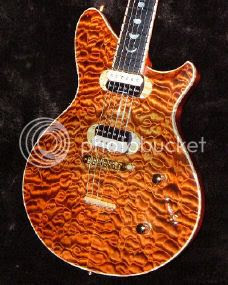 The majority of the guitar body will be made with a different wood like mahogany and the quilted maple will just be a cap. If the cap is thick enough, it will effect the sound of the guitar. However, there are lots of guitar companies that only use a thin maple veneer top. This looks pretty, but doesn't do anything to the sound. Thick maple caps can really brighten up the tone of a guitar.

This guitar is a beatiful example of quilted maple in use on a JET guitar. The figured maple really pops out once stained and polished. Depending on the color used it can look like flames or wavy water. Beautiful stuff. 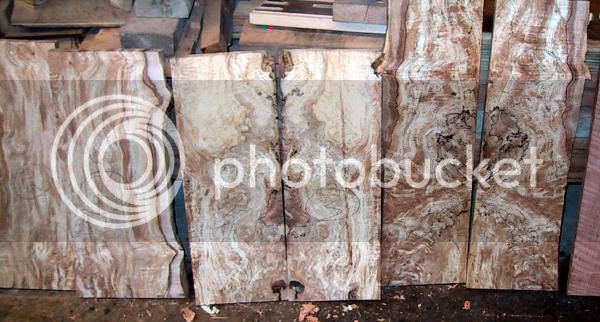 Spalted maple: Spalted maple is actually wood that has begun to decay. The cool lines and firguring seen in the wood is fungus attacking the grain. This leads to spectacular looking lines and figures throughout the boards. It almost looks like someone has drawn on the wood, but this is all natural. 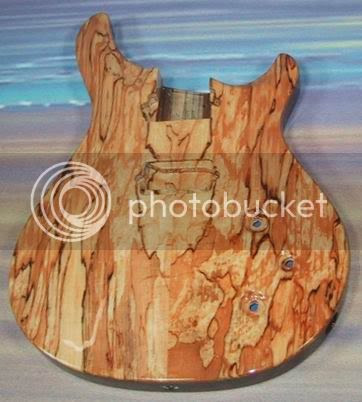 As with other figured maples, spalted maple is primarily used as a cap on a guitar body. However, spalted maple cannot really be used for anything else. It has a brittle structure and is not strong enough to be used for anything that could put strain on it. It looks gorgeous though and you can get all kinds of figuring. This guitar is one of Ed Roman's Quicksilver bodies, and I think the spalt looks like a collection of fall leaves. But you can get figures that look like lightening strikes or just random lines. It's truly gorgeous and rare. The sound quality is similar to that of other maple caps. 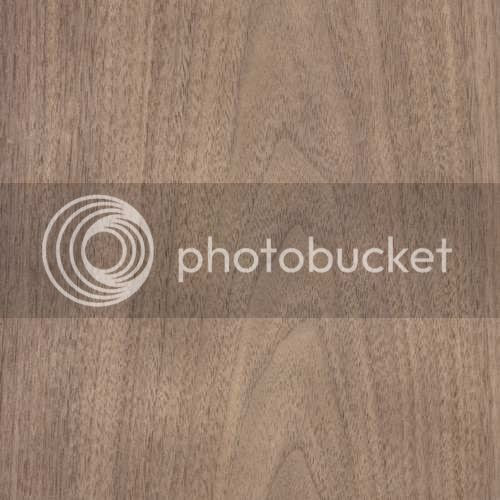 Black Walnut: Is a gorgeous, dark, "wood looking" wood. You can occaisionally find some figuring in walnut, but it tends to be pretty normally grained. Walnut is heavy and it's tonal properties are similar to mahogany -- rich, deep and very resonant. It's a very strong wood and easy to work. It's expensice because gunmakers like to use it for gun stocks, cabinet makers and hard-wood floor makers also use it extensively. This, of course, drives up the market.

Here is a guitar I lust after greatly. It's by Jaros Guitars. It's got most of what I love in a guitar; it has an ebony fretboard, a cool but simple fretboard inlay, it's walnut and it has a tune-o-matic bridge. If the hardware was chrome or nickel I'd probably have to rob a bank. 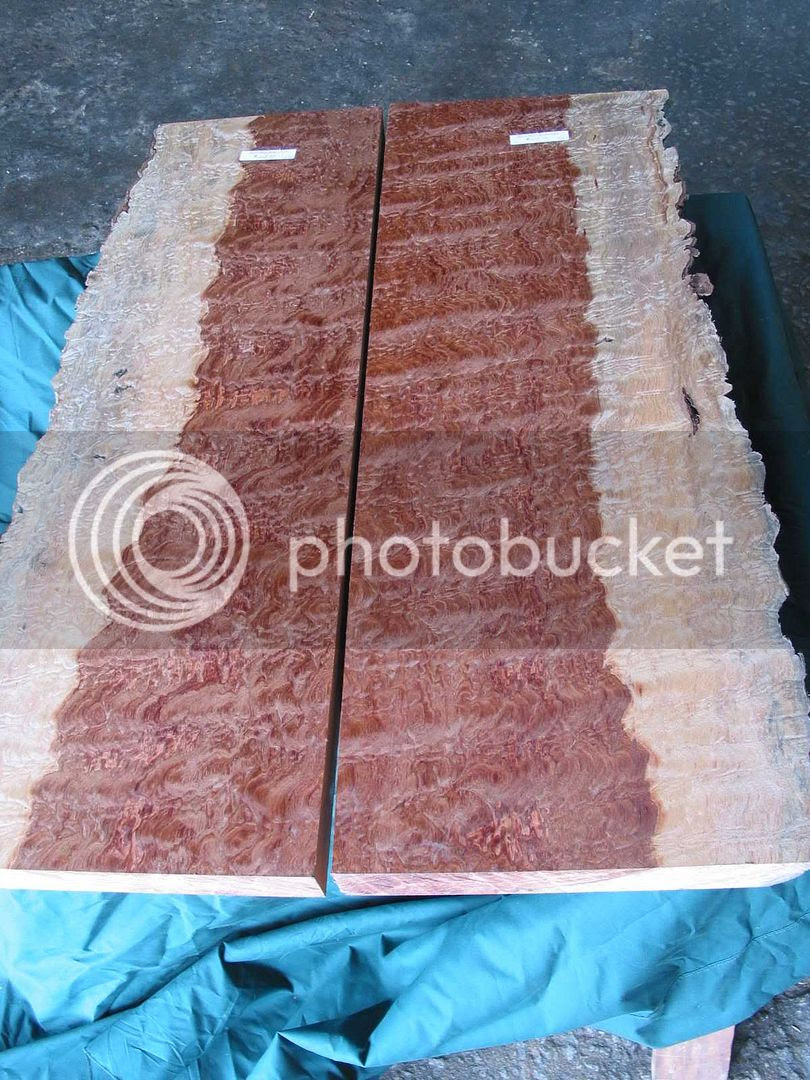 Bubinga: Bubinga is a gorgeous, red-tinted wood. It is referred to as African Rosewood, even though it's not of the rosewood species. 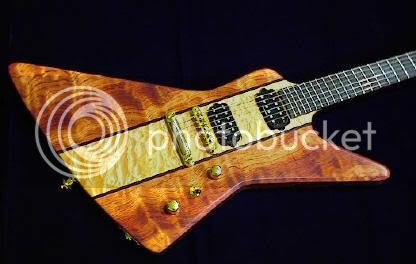 I've seen is used in a lot of different ways -- as a top cap, as accent stripes in the neck or body and as entire guitar bodies. It is very heavy and has a deep, dense sound. The more solid bubinga used, the better suited it is for a bass guitar. Caps are great for a regular six string.

The guitar is one of Ed Roman's Abstract guitars. 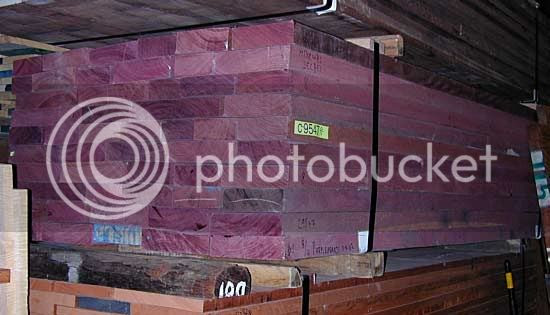 Purpleheart: The last wood I'm going to talk about today is Purpleheart. It is one of my favorite woods because it's purple and just how often do you see that? Purpleheart is amazingly heavy and dense. If you see a guitar made mostly of Purpleheart and want to buy it, start lifting weights. Sometimes PH is used for an entire guitar or bass neck and even that is enough to throw a guitar's balance way off. 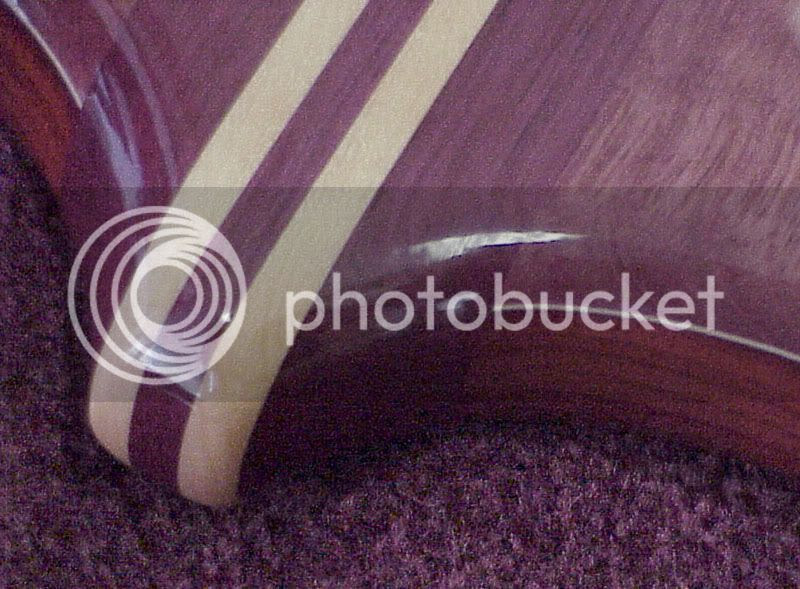 So, most of the time, you see PH used as accent stripes though the neck or body. Sometimes folks make guitar knobs out of it. You can see on this Alembic guitar how they've worked PH into the guitar body providing beautiful contrast in the woods. I have no idea how PH sounds as I've never seen a guitar made out of enough of the stuff to give me a PH "vibe." I've played some with accents and it is a gorgeous, tight grained wood. Even Ed Roman's site doesn't say too much about it. He does say it makes good fingerboard wood and that makes sense, although I've never seen it. I just had to throw it in this post because it's so cool.

Well, that wraps it up from me. There are literally thousands of species of wood out there that have been used for guitar manufacture. I could write a book on it, as others already have.

Hi there! Glad I found this place with like minded people. Doing a good job looks like.
All the best, Guitars

Fábio - from Brazil
I Enjoy your explanation. I believe natural tops are very cool.